European Union: Israel Has Obligation to Protect Palestinians & not Displace Them 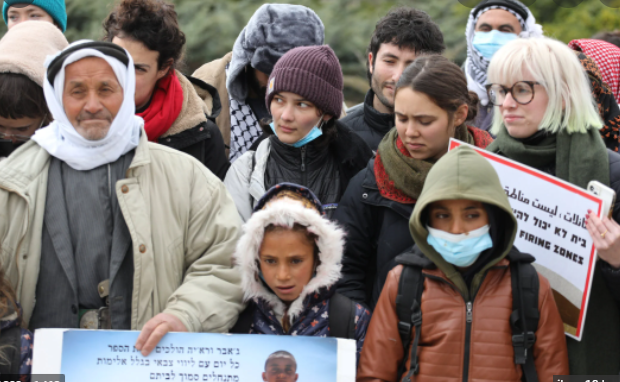 The EU criticized an Israeli Supreme Court ruling okaying the eviction of more than 1,000 Palestinians in Masafer Yatta. (Photo via Haaretz)

The European Union on Thursday criticized an Israeli Supreme Court ruling okaying the eviction of more than 1,000 Palestinians in Masafer Yatta area, south of the occupied West Bank province of Hebron.

On Wednesday, the Israeli Supreme Court issued its ruling paving the way for the demolition of eight small villages in Masafer Yatta, an area located in the farthest south of Hebron province in the occupied West Bank.

Palestinian news agency WAFA reported that as a result of this decision, about 1200 Palestinians in the area face a risk of imminent forcible transfer from their homes and destruction of their communities.

“Under international law, individual or mass forcible transfers and deportation of protected persons from occupied territories are prohibited, regardless of their motive,” said the EU in a tweet.

The EU added, “As the occupying power, Israel has the obligation to protect the Palestinian population & not displace it.”

Masafer Yatta residents and Israeli rights groups say that many of the Palestinian families living there have been permanently residing in the area since before Israel captured the West Bank in the 1967 Six-Day War.

The Association for Civil Rights in Israel (ACRI), who along with Masafer Yatta residents petitioned against the expulsion, said the verdict would have "unprecedented consequences."

"The High Court has officially authorized leaving entire families, with their children and their elderly, without a roof over their heads," ACRI said in a statement.