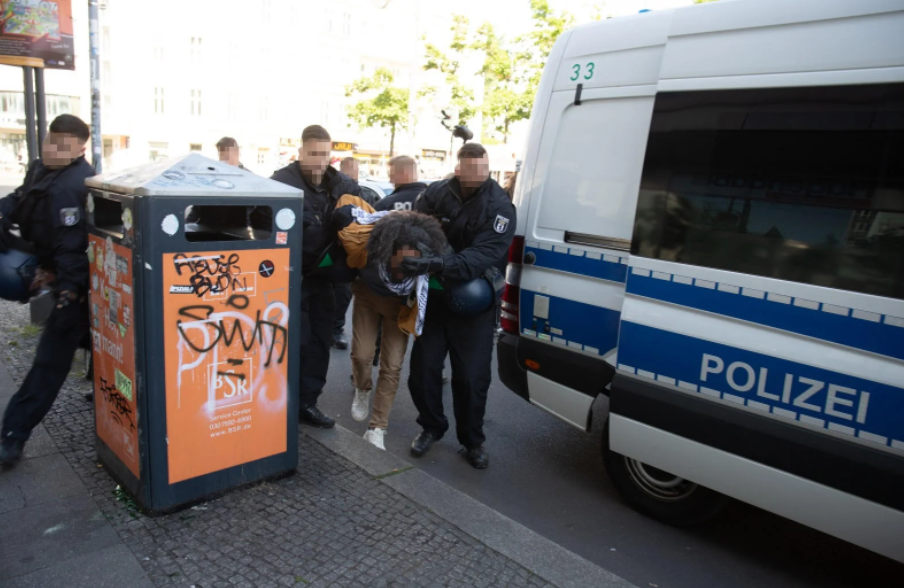 German police forcibly detain long-time Palestinian activist Majed Abusalama during a Nakba Day demonstration in Berlin, Germany, May 15, 2022. He says was hospitalized due to injuries he suffered during his detention. (Photo: HRW)

Human Rights Watch (HRW) condemned the Berlin bans on demonstrations marking the Nakba Day, on which tens of thousands of civilians were forced out of their homes during the war that led to the creation of the self-proclaimed State of Israel in 1948.

Omar Shakir, HRW Israel and Palestine Director, Middle East and North Africa Division, wrote: “This week, Palestinians and their supporters across the globe marked Nakba Day, commemorating the more than 700,000 Palestinians who fled or were expelled from their homes, and the more than 400 Palestinian villages destroyed in the events surrounding the establishment of Israel in 1948.”

According to witnesses, lawyers, and video footage reviewed by Human Rights Watch, police in Berlin banned several Nakba Day protests planned for May 13-15. When people took to the streets anyway, police responded forcefully, shoving and dragging several demonstrators, and detaining scores for up to two hours. In one clip, an officer tells a woman she is being held because “she shouted ‘Free Palestine.’”

HRW added that the police highlighted the high “emotion” and considerable “mobilization potential” on Nakba Day and amid the context of escalating events in Israel and Palestine. They also noted alleged ties between demonstrations and groups they claim have links to the Popular Front for the Liberation of Palestine (PFLP) and Hamas, Palestinian political movements that are on the European Union’s list of terrorist groups.

Organizers challenged the ban, but a Berlin administrative court and a German appellate court upheld it. Courts also upheld the Berlin police’s decision to ban pro-Palestinian demonstrations that had been planned between April 29 and May 1.

HRW said that the police decisions follow a 2019 Bundestag resolution that wrongfully declared boycotts of Israel inherently anti-Semitic. Meanwhile, the German government too often chooses not to speak out about Israel’s grave human rights abuses against Palestinians.

HRW’s Shakir stressed that international human rights law permits restrictions on the rights to free assembly, association, and expression, but restrictions should be necessary and proportionate. A preemptive ban on commemorating an event is an extreme restriction that effectively works as a collective punishment on those who wish to peacefully assemble, based on speculation over potential unlawful acts of a minority.

“While law enforcement should respond to and punish acts of violence, including incitement to violence and antisemitic acts, police should seek to regulate, not ban, demonstrations. The fact that people express outrage and emotions at demonstrations should not form any part of the basis of any ban”, added Shakir.

Zionist forces had taken more than 78 percent of historic Palestine, ethnically cleansed and destroyed about 530 villages and cities, and killed about 15,000 Palestinians in a series of mass atrocities, including more than 70 massacres.

The word “Nakba” means “catastrophe” in Arabic, and refers to the systematic ethnic cleansing of two-thirds of the Palestinian population at the time by Zionist paramilitaries between 1947-1949 and the near-total destruction of Palestinian society.

For many Palestinians, the Nakba is the first chapter in a process of land grab and dispossession that began in 1948.

This year, the Nakba Day comes at a time where many are angered by the killing of prominent Al Jazeera veteran journalist Shireen Abu Akleh.