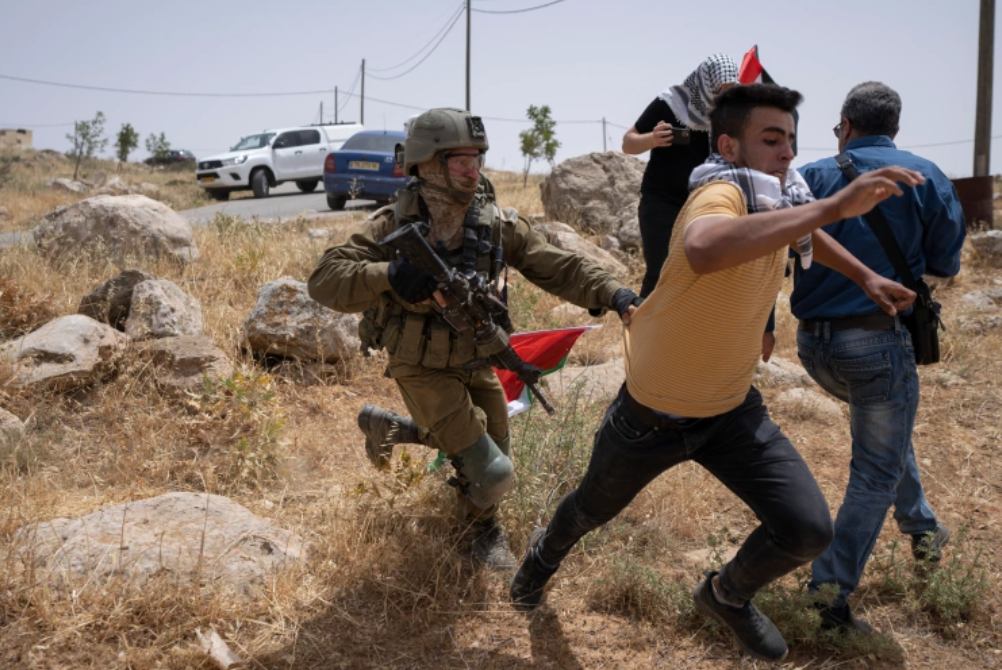 About 1,200 Palestinian residents, including 500 children, face the imminent risk of forcible transfers from their land, which Israel plans to use as a military training site. (File: Nasser Nasser/AP)

Scores of Palestinians and peace activists on Saturday were injured as Israeli occupation forces violently attacked a march opposing plans to dislocate hundreds of Palestinians from their homes in Masafer Yatta.

Local sources said Israeli soldiers unleashed barrages of tear gas grenades towards activists and supporters who gathered in Al Rakiz village in Masafer Yatta, south of the southern occupied West Bank of AlKhalil, to protest the Israeli government's plans to demolish these communities and displace the residents.

Israeli soldiers also violently beating the protesters to disband them, resulting in injuries.

On May 4, the Israeli High Court issued a decree greenlighting the demolition by the Israeli military of 12 Palestinian communities in Masafer Yatta and the displacement of over 1,000 residents as part of a scheme to grab their lands and homes for military training.

Following the court decision, three UN special rapporteurs said in a joint statement that Israel’s decision to evict approximately 1,200 Palestinians from their homes in Masafer Yatta in the occupied West Bank may amount to a war crime.

They added that the decision to forcibly transfer the Palestinian residents is a serious breach of international humanitarian and human rights laws, and an independent and impartial investigation into the matter should be established.

Some 500 children are among the estimated 1,200 Palestinian residents who are now at imminent risk of forcible transfer from their land following the judgement of the Israeli High Court of Justice earlier this month.

According to the rapporteurs, Israeli forces have reportedly already demolished structures in the Masafer Yatta communities of Khribet al Fakhiet and al-Markez.