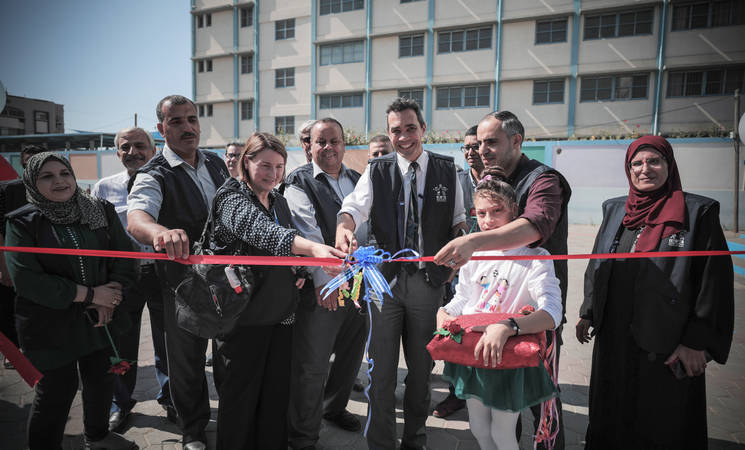 This week, the United Nations Relief and Works Agency for Palestine Refugees in the Near East (UNRWA) held the official inauguration ceremony for the Gaza Summer Fun Weeks (SFWs) 2022, which run between 25 June and 28 July.

The ceremony was held at the UNRWA Jabalia Elementary Co- Ed “B” School and was attended by UNRWA Chief of Staff, Ben Majekodunmi, the Officer-in-Charge of UNRWA Affairs in Gaza, Jenifer Austin, UNRWA senior staff, and representatives from the local community organizations, UN sister agencies and non-governmental organizations working in Gaza.

Following the May 2021 hostilities in the Gaza Strip, and based on a survey conducted by UNRWA, the incidence of war-related traumata increased, leaving about 42 per cent of surveyed UNRWA first grade school children in Gaza in need of psychosocial support. Even nine months later, 35 per cent of these children were still suffering from reactions to trauma.

The Gaza SFWs are one of the Agency’s responses and interventions to help alleviate the psychological effects of repeated cycles of conflict and the devastating living conditions resulting from 15 years of blockade.

“Like all children in the world, Palestine refugee children have a fundamental right to live, learn and play in a safe and stimulating environment. This is not always guaranteed in Gaza, especially in the past 15 years that have seen blockade and destruction from ever-repeating cycles of violence. For us, providing the necessary psychosocial support for the children is, therefore, a top priority,” said Jenifer Austin.

“The SFWs are an essential component of our effort to re-introduce a sense of security and stability into the children’s lives, and an outlet to just have fun. We are really pleased to see how much the children are enjoying themselves,” she added.

For four weeks, more than 120,000 Palestine refugee girls and boys, including children with disabilities, will be able to interact with their peers through a variety of activities, including greening, recycling, sports, drawing, handicrafts, and learning a language.  In addition to providing a safe space to just play, this will help them promote the social values of leadership, respect and cooperation in 83 locations across the Gaza Strip.

UNRWA said the SFWs do not only provide Palestine refugee children with a protective environment at UNRWA schools to play, but they also offer some Gaza youth temporary work opportunities. SFWs 2022 offer 2,750 short-term job opportunities with UNRWA to registered refugees through its Job Creation