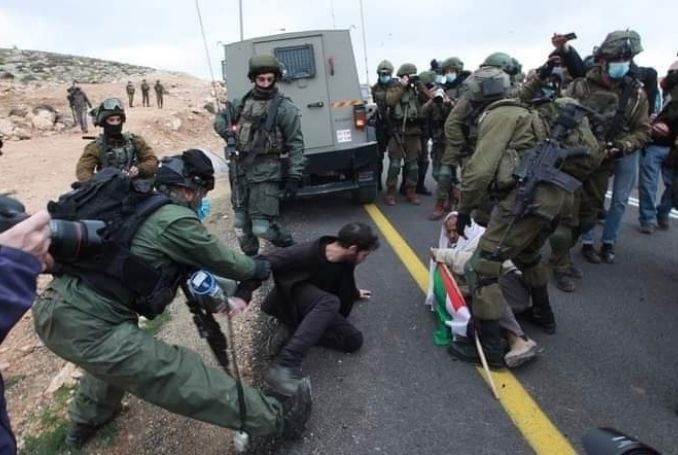 Israeli troops on Friday cracked down on an anti-expulsion rally in Masafer Yatta, south of AlKhalil, leaving dozens of Palestinians injured, according to local sources.

Rateb Jbour, an anti-colonial-settlement activist, was quoted by Palestinian news agency WAFA as saying that the heavily-armed soldiers brutally assaulted the Palestinians during the rally in Ein al-Baida and al-Juwaya, two of the 19 hamlets making up Masafer Yatta, causing scores to suffocate from tear gas inhalation.

The soldiers detained five international activists who partook in the rally, which was organized by the Committee in the Defense of Masafer Yatta, to confront the imminent forcible displacement of Palestinians living in the area.

The Alliance for Human Rights, a human rights organization, said that activists nonviolently demonstrated in Ein Al Baida, holding placards reading “Save Masafer Yatta” and “End Israeli apartheid”. They were met with aggression by occupation forces.

Recently, Israel’s top court gave the army the green light to forcibly expel some 1,300 Palestinians living in twelve villages or hamlets making up the Masafer Yatta area, which relies heavily on animal husbandry as the main source of livelihood, marking one of the largest expulsions carried out by the State of Israel in recent decades.