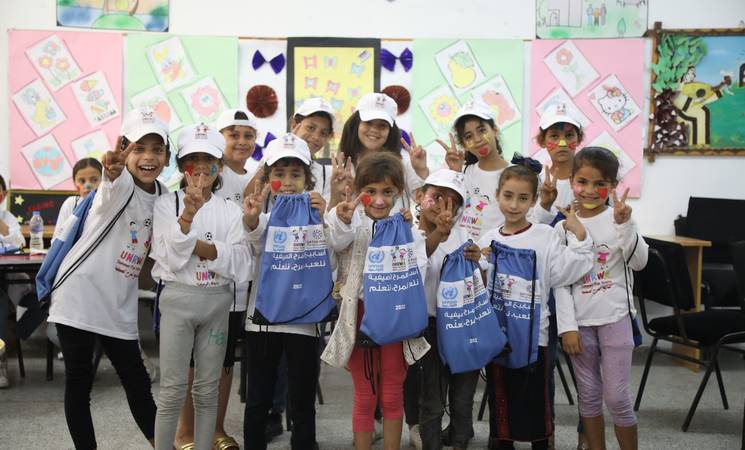 In light of the increasing psychological trauma Palestine refugee children suffer from, the United Nations Relief and Works Agency for Palestine Refugees in the Near East (UNRWA) has launched psychosocial summer activities known as the UNRWA Summer Fun Weeks (SFWs).

The Qatar Fund for Development (QFFD) contributed to the Summer Fun Weeks, as well as the symposium on mental health at the conclusion of these activities.

Taking place between 25 and 28 July, the SFWs will support children’s well-being and strengthen their resilience in the face of multiple rounds of conflict they have survived.

For four weeks, more than 120,000 Palestine refugee girls and boys, including children with disabilities, will be able to interact with their peers through a variety of activities, such as greening, recycling, sports, drawing, handicrafts, and learning a new language.  In addition to providing a safe space for carefree play, this will help promote the social values of leadership, respect and cooperation in 83 locations across the Gaza Strip. UNRWA has also distributed 5500 QFFD-funded tote bags containing coloring books and colored pencils to students at five UNRWA schools participating in the SFWs.

The Palestine refugee children who are participating in these activities, the eldest of whom will be younger than 16 years old, have witnessed four conflicts and have never experienced the luxury of free movement or having power for 24 consecutive hours. The overwhelming majority of them have never moved out of the confined coastal enclave of Gaza.

“UNRWA is grateful for this Qatar Fund for Development (QFFD) which comes at the right time to support the children of Gaza and reduce their suffering and to give them the opportunity to have fun,” said Jenifer Austin, the Officer-in-Charge of UNRWA Affairs in Gaza.