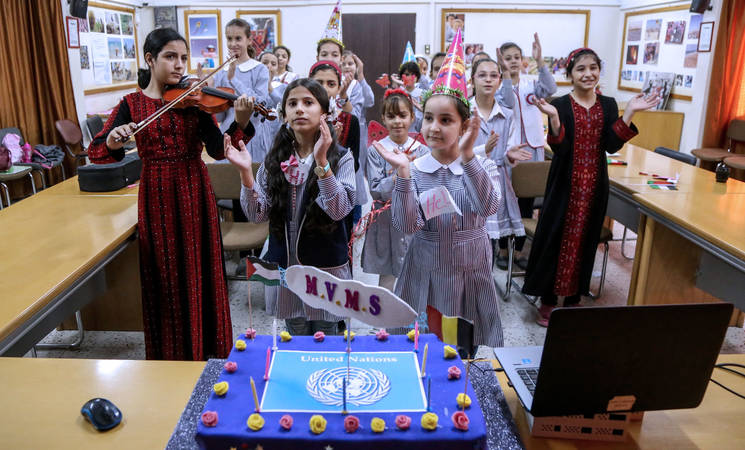 The United Nations Relief and Works Agency for Palestine Refugees in the Near East (UNRWA) shared on Friday with Agency partners the results of its review of a recently released report by IMPACT-se alleging UNRWA knowingly utilizes educational materials outside of UN values.

The Agency review concluded that the self-learning materials cited in the report are not authorized for use in any UNRWA school.

Launched in 2021, the DLP is an online learning platform where, following a three-step vetting process, UNRWA teaching materials are posted for student and parental use.  The platform, available to the public, posted over 2,600 supplemental learning materials for use in Gaza alone during the previous school year.

Stenseth highlighted that none of the cases cited in the report by IMPACT-se was drawn from the UNRWA online learning platform.

IMPACT-se is an organization already well known for its previous sensationalized attempts to delegitimize the Agency’s work. Stenseth reminded partners that this organization’s latest report was consistent with its other sensationalized work, characterized in a robust 2021 academic review undertaken by the Georg Eckart Institute on behalf of the European Commission as “marked by generalising and exaggerated conclusions based on methodological shortcomings.”

In this instance, the group attempted to explain the lack of examples drawn from the UNRWA Digital Learning Platform by observing a paucity of material on the site - a normal occurrence as materials are only available during the lifecycle of their need for students. As UNRWA schools are currently closed for the summer, no material is uploaded on the Agency’s learning platform.

In reviewing the material referenced in the report though, UNRWA discovered the existence of a private, commercial website that illegally utilizes the Agency’s logo and the names of UNRWA educators.  The Agency is seeking additional information on these sites for follow-up action, including possible legal referral. Stenseth expressed hope the report’s authors will fully disclose the web addresses of the sites it uncovered.

Stenseth emphasized the unwavering commitment of UNRWA to educating Palestine refugee children along the UN principles and values and zero tolerance of hate speech and incitement to discrimination, hostility, or violence: “Others talk, UNRWA delivers. Our education system is acknowledged as the model for effective refugee education, delivering quality and cost-efficient education. Reports like these, premised upon smoke and mirrors - obfuscation, not truth - are indicative of an organization trying to garner attention for itself, rather than advancing the cause of refugee education.”