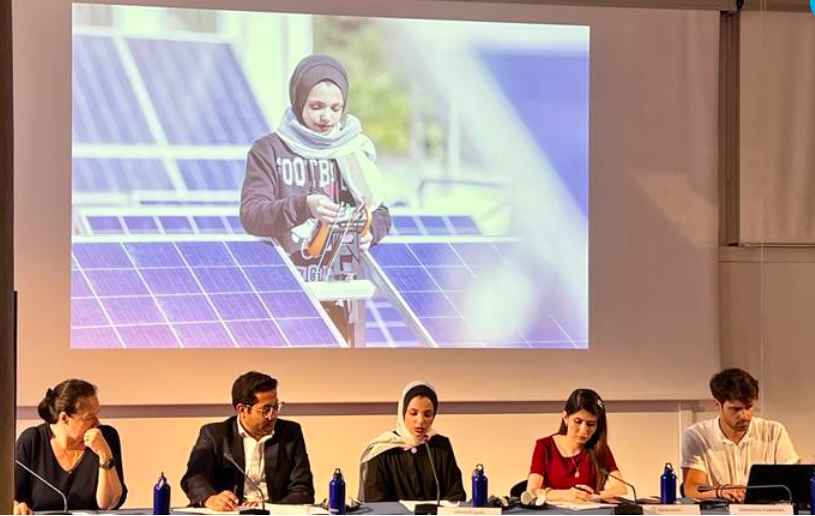 Ghada Krayem participates in a panel discussion at the 2nd edition of the Global State of Human Rights Conference, jointly organized by the European Parliament and the Global Campus of Human Rights in Venice, Italy,16 July 2022. (Photo: UNRWA).

On 16 July, alumna of the United Nations Relief and Works Agency for Palestine Refugees in the Near East (UNRWA)  and winner of the European Training Foundation (ETF) Green Skills Award Ghada Krayem shared her experience as one of Gaza’s first female technicians in renewable energy at the 2nd edition of the Global State of Human Rights Conference.

The conference was jointly organised by the European Parliament and the Global Campus of Human Rights in Venice, Italy. The conference brought together Members of the European Parliament, academics of the Global Campus network, high officials from the EU and international organisations, civil society, and human rights defenders to discuss the state of human rights in the world, with a particular focus on children’s rights.

Ghada Krayem is one of 97 technicians from the first class of a solar energy course at the UNRWA Gaza Training Centre (GTC), supported by the Government of Germany through German Agency for International Cooperation (GIZ). Together with her fellow graduates, the 22-year-old Palestine refugee is breaking barriers in a field dominated globally by men while addressing the impact of climate change.

In 2021, the ETF granted Ghada the Green Skills Award after thousands of citizens from all over the world voted for the ‘best practice in teaching and learning of green skills.’ This year, she was selected to work as a photovoltaics consultant for GIZ.

Intervening on the panel ‘Looking ahead - Youth as drivers of change,’ Ghada shared her story and highlighted the crucial role of UNRWA in her education: “I spent most of my education in schools run by UNRWA. I went back to UNRWA to study at the Gaza Training Centre (GTC), one of the biggest vocational training centres operated by the Agency, which equips Palestine refugees with relevant skills and expertise.”

“The emerging renewable energy field was both a demanding and promising option. I was especially interested in solar photovoltaic systems: electricity shortages are common in Gaza, but in a sunny region, solar systems are a promising source of renewable energy”, added Ghada.

She also addressed the challenges faced by young Palestine refugees in Gaza, where the economy and its capacity to create jobs have been devastated, resulting in the de-development of a highly skilled and well-educated society.

"Despite being highly educated, young people face the prospect of unemployment, remaining dependent on families and isolated from the outside world, rather than creating an independent future for themselves," Ghada explained. Last year, the youth unemployment rate in the Gaza was at 64 per cent.

On the sidelines of the conference, Ghada met with fellow youth representatives, human rights activists and Members of the European Parliament. They discussed the need for strong support to young Palestine refugees in the Middle East and their role as drivers of positive change to improve the daily life of their communities.

The services UNRWA provides represent a lifeline for Palestinian refugees. Over time, UNRWA schools have built a reputation for high academic achievements and low drop-out rates. Today, literacy and levels of educational attainment of Palestine refugees are among the highest in the Middle East.