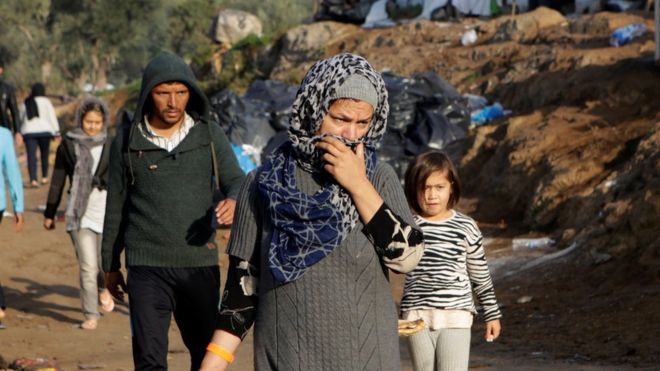 Moria on Lesbos is currently home to more than 15,000 people in a camp meant for fewer than 3,000. Credit: Reuters

Greek government spokesman Stelios Petsas and Deputy Minister of National Defense Alkiviadis Stefanis said the new centers will host between 1,000 and 5,000 migrants and they will serve as alternatives for the open camps such as Moria and Vathy.

The announcement makes part of the conservative government’s intent to rein in a recent surge in migrant influx by tightening grip on borders and speeding up return procedures.

The government presented the new centers as a more humane alternative to the grossly crowded and internationally-condemned camps.

The camps, on five Aegean Islands, together hold some 34,000 people, many of them living in squalor. Over recent weeks, and with the cold winter months looming, migrants have protested by setting fires and rioting.

“There is a desperate lack of medical care and sanitation in the vastly overcrowded camps I have visited,” said Dunja Mijatovic, Europe’s top human rights official, last month, warning of impending “catastrophe.”

Greece’s leaders argue that the blame for the conditions rests also with Europe.

At the summit of European Union leaders in Brussels last month, the Greek prime minister, Kyriakos Mitsotakis, called on the bloc to come up with a “Plan B” to deal with the possibility of a new refugee crisis, saying Greece could not handle the problem alone.