UNRWA: Palestine Refugees with Disabilities More Vulnerable than Other Persons 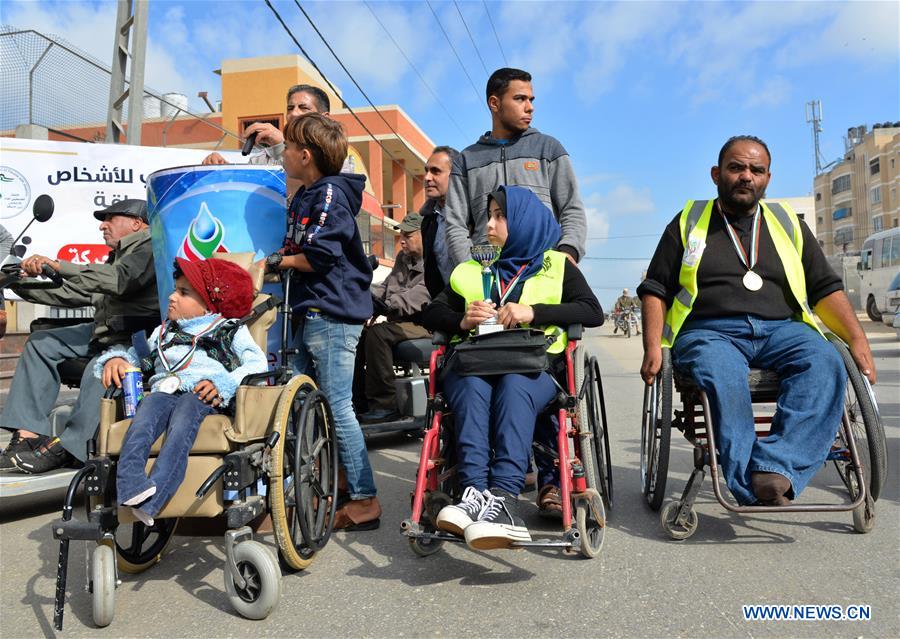 Palestinians with disabilities in Gaza mark International Day of Persons with Disabilities. Photo via: Xinhua

In its newly-released disability inclusion annual report 2019, the United Nations Relief and Works Agency for Palestine Refugees (UNRWA) said that Palestinian refugees with disabilities are doubly stigmatized and marginalized.

“Palestine refugees with disabilities may be more vulnerable than other persons with disabilities because, in addition to widespread socio-economic exclusion and poverty, they are also more prone to neglect, abuse and violence, psychosocial distress, loss of assistive devices and decreased access to needed medications”, said UNRWA in a summary of the report.

The Agency said that the funding crisis that has hit UNRWA since 2018 has, in particular, led to a loss of services for persons with disabilities.

“Humanitarian settings make Palestine refugees prone to acquiring long-term impairments, particularly in Syria, Gaza and West Bank due to the ongoing use of live ammunition by the Israeli Security Forces in Gaza and West Bank and the explosive remnants of war and unexploded ordnance in Syria,” the report read.

For example, a 2019 nationwide household survey in Syria indicated a disability prevalence of 27 per cent (aged 12 and above), using the Washington Group Short Set questions. Among them are Palestine refugees with disabilities who are exposed to violence, inadequate medical assistance and limited access to livelihoods, the report said.

The study findings also revealed that disability prevalence doubled from age 12-14 (15 per cent) to age 40-44 (32 per cent), which was linked to military engagement by men, displacement and migration.

In Gaza, the ‘Great March of Return’ (GMR), which started in March 2018, has also led to an increasing number of persons injured, including Palestine refugees. A significant proportion of the injured demonstrators have acquired permanent disabling conditions.

From the beginning of the GMR on 30 March 2018 to 30 October 2019, the WHO has verified that 321 Palestinians had been killed and 31,338 people injured. Furthermore, the permanent disabilities that had resulted from the GMR until 30 August 2019 from the injuries had included 149 amputations, including 30 children. Also, 24 patients were paralysed from spinal cord injuries and 15 people lost their sight as a result of the ISF use of force against the demonstrators, the report found out.

UNRWA said disability has limited the refugees’ access to basic services, and participation in the mainstream of life on an equal basis with others. Disability is closely linked to poverty. Poor people are prone to acquiring permanent impairments due to inadequate access to good nutrition and health care; higher probability of being in risky/hazardous jobs and the likelihood of living in unhygienic or unsafe places.