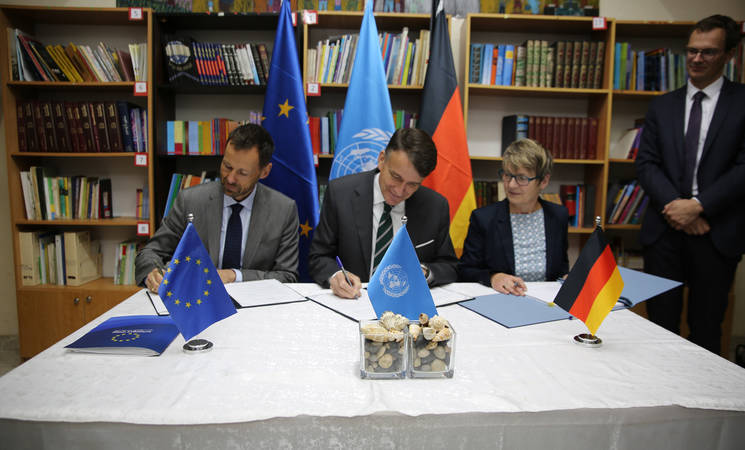 The European Union (EU) and the Federal Republic of Germany signed on Wednesday additional contribution agreements with the United Nations Relief and Works Agency for Palestine Refugees in the Near East (UNRWA).

In a statement, UNRWA said that the event took place at the UNRWA Jerusalem Girls’ School in Silwan, East Jerusalem, with several EU Member States (MS) also joining the ceremony as part of the collective EU and MS support to UNRWA and Palestine refugees.

UNRWA said that in 2019, the Agency was extremely grateful to receive a contribution of EUR 82 million from the EU in support of critical human development work UNRWA provides in the region. At an extremely difficult time for Palestine refugees, the EU is contributing a further EUR 21 million.

At the UNRWA Advisory Commission meeting on 25-26 November, Christian Saunders, the Acting Commissioner-General of the Agency, appealed to donors to address the funding shortfall of US$ 167 million.

Half of the vital donations announced on Wednesday will contribute to easing the Agency’s severe cash flow crisis, helping it deliver key services for the remainder of the year. The balance of the funds for UNRWA will help alleviate poverty in the Gaza Strip through employment generation, as well as construction and infrastructure projects essential to the work of UNRWA on the ground.

In addition to commitments signed today, a new assistance package of an additional EUR 36 million to UNRWA was adopted under the EU Regional Trust Fund in Response to the Syrian Crisis, to strengthen the resilience of Palestine refugees from Syria and host communities in Jordan and Lebanon through the provision of basic services.

Christian Saunders, the Acting Commissioner-General of UNRWA, said: “I would like to express my deep appreciation for the generosity of the European Union and its Member States, including Germany and the others present here today, for supporting and investing in Palestine refugees, for creating the opportunities to allow them to fulfill their full potential, which is crucial to their future and to this region.”

At the same time, Acting European Union Representative Tomas Niklasson said: “The EU and its Member States are proud to remain the largest providers of international assistance to Palestine refugees and the Agency's most reliable donors.”

“For over four decades, the EU has established itself as a key strategic partner for the Agency, supporting UNRWA in its efforts to help Palestine refugees achieve their full potential in human development and assisting the Agency in efficiency gains and reforms”, stated Niklasson.

“In 2018, as the Agency faced its most significant financial shortfall since its inception, the EU and Member States emerged as the Agency’s largest donors”, he added. “Building on decades of commitment and partnership, the EU strives to enable UNRWA to continue its operations – including in East Jerusalem – until a just, fair, agreed and realistic solution to the final status issues of Palestine refugees is reached.”

Michael Herold, Deputy German Representative, noted: “UNRWA is one of Germany’s most important partners in the Middle East as a regional stability factor in an unstable environment. UNRWA offers perspective and dignity to millions of people. Despite all challenges, it is of paramount importance that the organization is able to maintain operations and keep schools open. Germany will remain a reliable supporter.”