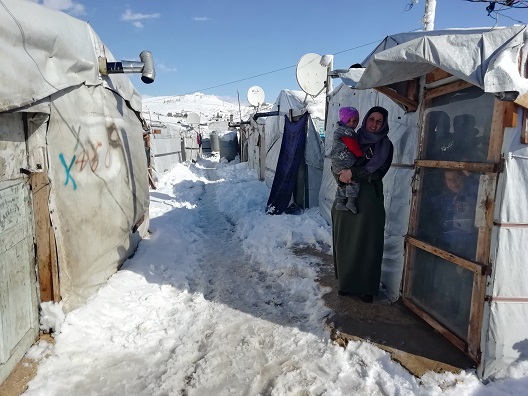 A Syrian refugee woman holds her baby as she stands in front of her tent at a makeshift camp at the Lebanese border town of Arsal, Lebanon January 9, 2019. REUTERS/Zeina Alhoujeyri

A number of Palestinian families from Syria have been evacuated from their homes in AlRashidiya refugee camp, south of Lebanon, after heavy rains brought severe flooding on their tents and substandard residential facilities.

Activists said the rain storm forced at least eight Palestinian families to leave their homes and seek provisional shelter at UNRWA offices in the camp.

Secretary of the popular committee in AlRashidiya camp, Abu Ibrahim AlDahab, told Quds Press that nearly 20 homes risk to collapse due to high sea waves. 30 homes were evacuated along the coastline adjacent to AlRashidiya refugee camp.

The Action Group for Palestinians of Syria (AGPS) quoted the local follow-up committee as leveling heavy criticism at UNRWA for its apathy regarding appeals to construct a sea dam using funds raised to that end.

The storm has made life more difficult for the thousands of Palestinians living in the country’s refugee camps and substandard accommodation such as unfinished buildings or shacks. Few of these shelters are well insulated or suitable for the cold months, despite efforts by UN agencies to help refugees to prepare for winter.