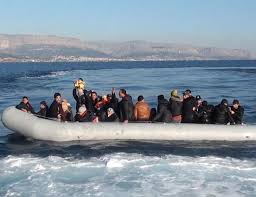 Palestinian refugees continue to risk their lives onboard the “death boats” to Greece.

The Turkish Coast Guard arrested on Sunday 107 irregular immigrants, including Palestinian refugees, in the Turkish Aegean province of Aydin as they attempted to illegally disembark on Greek islands.

The Turkish Coast Guard said that 38 of the arrested migrants are Syrian nationals and 26 are Afghans. The list also includes12 Palestinian refugees.

Over recent years, the Aegean coast has served as a launch-off destination for thousands of illegal migrants wishing to disembark in Greece, fleeing Syria and nearby conflict zones.

An agreement between Turkey and Greece to tighten grip on refugees from Syria trying to creep into the Greek territories via the Turkish borders has made the situation far worse.

Palestinian refugees continue to risk their lives onboard the “death boats” to Greece. Human rights monitors have kept record of the death of dozens of refugees onboard Greece-bound ships. Several others have been arrested by Turkish and Greek coast guards near the borders.

Greece was overwhelmed by the migrant crisis which erupted in 2015 with tens of thousands of people arriving after making perilous crossings in barely seaworthy vessels via neighboring Turkey. Their stays in the camps have extended over long months, in squalid and unbearable conditions.

Over recent months, Doctors Without Borders (MSF) drew attention to the particular plight of minors and appealed to EU states to take urgent action to "put an end to this cycle of suffering", warning of the effect on the children's mental and physical health caused by conditions it termed inhumane.

The NGO has said it fears some children are left at increased suicide risks in dangerously overcrowded camps such as Moria on Lesbos.