DFLP: 75% of Palestinian Refugees in Syria Fled their Camps 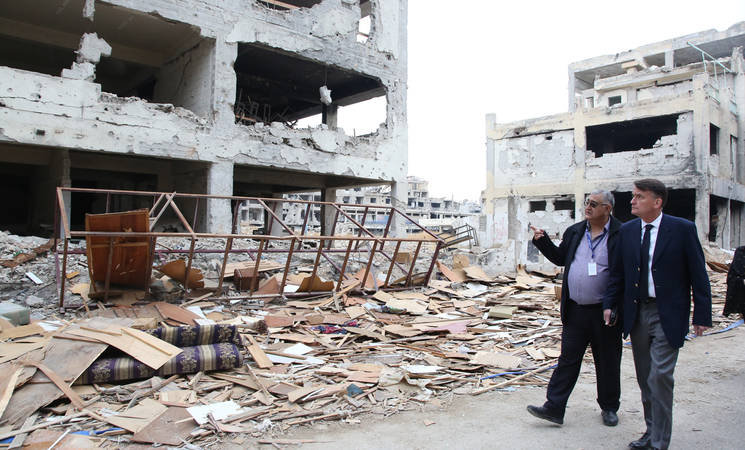 The conflict led to the displacement of 58% of Palestinian refugees from their camps and residential communities across the ravaged country, Member of the political bureau of the Democratic Front for the Liberation of Palestine (DFLP) in Syria, Hasan Abdul Hamid, has said.

According to Abdul Hamid, 370,000 Palestinian refugees have gone displaced from their camps in Syria; 200,000 others have become internally displaced in the Syrian territories while 170,000 fled to other countries.

He added that 700 Palestinian families returned, a few months earlier, to Daraa refugee camp; 150 returned to Handarat camp and 150 to Yarmouk camp, after the government forces recaptured such zones.

The DFLP representative said 40% of buildings in Yarmouk camp need reconstruction; 40% are habitable, and 20% are completely destroyed. The situation in Handarat camp is not far different.

He said serious efforts should be made by UNRWA, the Palestine Liberation Organization, and all other concerned bodies in order to reconstruct Yarmouk homes and facilities.

At the same time, the DFLP delegate said contacts have been underway to follow up on the situation of displaced Palestinians from Syria in Lebanon and facilitate the safe access of those who wish to return to Syria.

The Syrian conflict has impacted Palestine refugees inside and outside the Syrian territories. According to UN data, as many as 120,000 Palestine refugees have fled war-stricken Syria since 2011, including 28,000 to Lebanon and 17,000 to Jordan. There used to be 560,000 countrywide, mainly in Aleppo, Homs, Hama, Latakia, Damascus and Deraa.

Today, some 440,000 Palestine refugees remain in Syria, more than half of them are internally displaced, and nearly all require sustained humanitarian assistance.