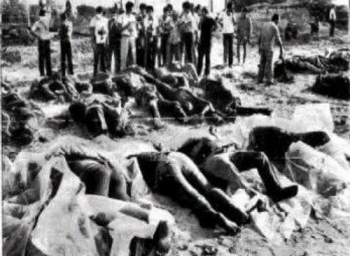 For Palestinians, 9th of April is imprinted in their collective memory. It is the anniversary of Deir Yassin massacre when in the early morning of April 9, 1948, commandos of the Irgun and the Stern Gang, attacked the village of Deir Yassin, killing over 200 Palestinians.
Armed with explosives and machine guns, a force of 120 men attacked the sleeping village at 4:30 in the morning in what was then code named “Operation Unity”. Eye witnesses and British interrogating officers confirmed brutal killing of women and children.

The massacre in Deir Yassin was part of an official Zionist strategy to frighten Palestinians out of their land and into neighboring countries. Yosef Weitz, member of the Jewish Agency’s Transfer Committee declared that “between ourselves it must be clear that there is no room for both people together in this country… we shall not achieve our goal with the Arabs in this small country. The only solution is a Palestine without the Arabs and there is no other way than to transfer Arabs from here to the neighboring countries, to transfer all of them, not one village not one tribe should be left”.

“Deir Yassin is one in a list of many atrocities against the Palestinians”, said Majed Al Zeer, the General Director of PRC. “Many other atrocities and massacres were carried out simultaneously in 1947 and 1948, when Zionist Para military forces were embarked on a program to expel Palestinians out of their ancestral land. 750,000 Palestinians, over a quarter of the population, were exiled and continue to endure suffering as refugees”.

“Though Palestinians fled, they could not escape Israel’s violence and aggression. Many more atrocities followed, most notably Sabra Shatilla, Jenin, Khan Younis, Hebron and Gaza. Even now as we remember Deir Yassin, Palestinians in Gaza are being killed by Israel”, said Mr. Zeer.

Gaza continues to be gripped by a siege and on the anniversary of Deir Yassin 11 more, including 5 children were killed and many more were wounded as the Israeli army shelled the already damaged Gaza International Airport in Rafah. Israeli air strikes were also carried out in central Gaza where many homes on the eastern part of the city were shelled.According to Palestine News Network, A Palestinian farmer was also wounded when the Israeli Air Force fired missiles into the Al Waha area, North West of Gaza city. Several Air Strikes also targeted areas east of Dir Al-Balah in the central Gaza Strip, and Al Hawouz area in addition to the Al Rantissi Base, north of Gaza, causing excessive damage.

PRC calls on all to take a moment and remember Deir Yassin and bear in mind that the forces of aggression and the conditions of injustice behind this massacre has locked Palestinians into a cycle of oppression, exile and violence which has disgracefully normalized violence and aggression against the Palestinians.

Ending this ongoing cycle of violence against the Palestinians and giving them their rights is the only just and realistic path to peace. This will not happen unless the international community demands that Israel respect and abide by the rule of law and until the international community takes effective measures to enforce them, as it did in Libya. The international community must show the same level of concern as it did for the civilians of Ben Gazi and impose a similar heavy price on an Israeli regime that drops bombs just because it can. Such double standards must end and real justice must prevail over the national self interest of one party if we are serious about justice and peace.