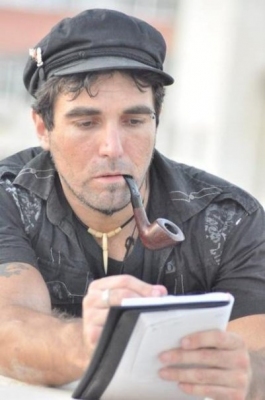 Share on Facebook Share on Twitter
The Palestinian Return Centre (PRC) strongly denounces and condemns the killing of Italian peace activist Vittorio Arrigoni in the Gaza Strip. This unfathomable event is a flagrant violation of basic human rights for those who stand by justice. We send our deepest condolences to his family and the Italian people.
Vittorio Arrigoni was an Italian peace activist who journeyed to Palestine upon hearing of the plight of the Gazan people. Upon his arrival in the Gaza Strip in summer 2008, he began his tireless work to ease the suffering of the people there. He was not only a journalist, but also a relief worker who risked his life many times during the 2008-09 Gaza onslaught. He left his comfortable life in Italy, choosing to live in the hard conditions in Gaza for 3 years, with no thought for his own safety.Vittorio Arrigoni was more than just a wonderful person; he was always kind and considerate to the people of Gaza who were living through the war and siege. He shared with the people of Gaza their smiles and tears, diligently working on sending messages to the world of their suffering through his press writing and diaries.We salute the position of many Italian people in supporting freedom and democracy in Palestine. Arrigoni was great example for Italian people who sacrificed themselves in the quest for freedom for others.The PRC calls on the Palestinian government in Gaza to act promptly to bring those criminals who killed him to justice. Those criminals harm and offend the struggle of Palestinian people.Furthermore, we call on the Gaza government to secure full protection for those activists still in Gaza. The Palestinian people are still in need of international solidarity support in the face of Israeli occupation.The PRC suspects that there are some external factions attempting to frighten away International activists from the work in Gaza. Such events will only benefit the Israeli occupation, which is trying to block peace activists from reaching Gaza through the next Freedom flotilla aid convoys.
Short Link : http://bit.ly/2A54634
Tags
Next Article
PRC condemns the killing of Italian Activist, Vittorio Arrigoni
Previous Article
Press Release: Remembering Deir Yassin
Most Views
Related Posts