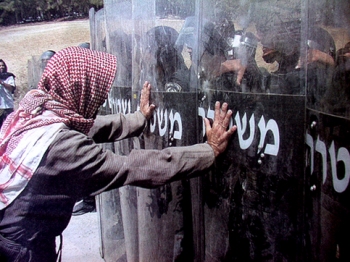 The Palestinian Return Centre (PRC), London, firmly rejects Israel’s demands on Palestinian negotiators to recognize it as a ‘Jewish’ state. Speaking at a press conference with her French counterpart, Bernard Kouchner, on Sunday 18th November, Israel’s Foreign Minister Tzipi Levni claimed that the establishment of a Palestinian state in the West Bank would constitute a solution for Israel's Arab population.


‘This dangerous development must be resisted by all Palestinians. Any such recognition would jeopardise the right of return for millions of Palestinian refugees’, said Majed Al Zeer PRC’s Director General

The PRC reaffirms its long-standing position that any negotiated settlement with Israel must take place within the framework of international law and not on the basis of Israel’s fantasy to become an ethnically pure state. ‘Acceptance of this provocative demand would legitimize Israeli’s discriminatory policies against the Palestinian Arabs in Israel and expose them to the persistent threat of ethnic cleansing’, Al Zeer added.

Having already recognized the state of Israel in Oslo, the PRC urges the Palestinian Authority of President Mahmud Abbas to reject all further demands for recognition of Israel as a ‘Jewish’ state.