Press Release: THE IMMORAL SIEGE OF GAZA THREATENS THE LIVES OF ITS INHABITANTS 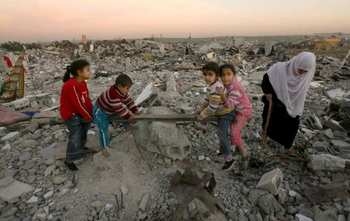 The Gaza Strip has been subjected to a total blockade for almost two years running. It threatens the lives of the Palestinians who remain in the territory and denies them of the most basic opportunities of a decent human existence.


Since last summer the sanctions have been tightened on Gaza - a tiny piece of territory with one of the largest population density in the world. The blockade now affects the lives of Gaza's population in a most distressing manner. Most of them are refugees who inhabit decaying refugee camps.

The siege, which is supported by the Israeli Occupation Government, has reduced the Gaza Strip in which 1.5 million people reside to a veritable huge prison. None of the residents are able to leave the territory under any circumstances; not even the most desperate health cases, foreign-based students, expatriate workers or journalists and officials from humanitarian organizations.

The siege further prohibits the import of essential medicine as well as food and all forms of humanitarian aid. This includes; fuel supplies upon which the territory relies upon entirely from external sources, primary industrial raw material, construction material and other basic necessities of life.

The harsh sanctions have created many disturbing realities of far-reaching catastrophic dimensions, particularly in the areas of health, nutrition, education and humanitarian aid. They have resulted in the total paralysis of Gaza's industrial and economic sectors. There have also been serious consequences on the labour market, already suffering from records levels of unemployment - among the highest in the world.

Since the beginning of November 2007 the number of fatalities from the sanctions has risen markedly. One person dies very day as a consequence of the denial of medicine or the prevention of severe cases from travelling abroad for treatment. In all cases the victims possessed the required papers to prove they needed emergency medical treatment abroad.

The closure of the Rafah Crossing, the only opening to the outside world is a witness of the consequences of the strict sanctions imposed on the people of Gaza. For several months thousands of people have been stranded at the Crossing either in their attempt to enter or leave the Gaza Strip. Among these are an estimated 3,000 students registered in foreign universities, colleges and schools. They were barred from leaving Gaza after visiting parents and relatives at beginning of the summer. The academic future of an entire Palestinian generation is now threatened in Gaza.

These critical developments come at a time when the Israeli Occupation Forces continue its daily military aggression against the Palestinian population of Gaza. Victims of every age die each day. There is, besides, widespread destruction of the civilian structures. To add insult to injury the Israeli government is still threatening to carry out a large-scale military invasion of Gaza in coming weeks. This completes the picture of the humanitarian situation.

It is most regrettable is that after all the repeated warnings in recent months from UN relief and humanitarian agencies as well as NGO's concerning the dangers of the sanctions policy - the international community has ignored them completely. This has been evidenced in the case of those who uphold the sanctions, foremost among them being Israel and its collaborators.

We the undersigned in the light of these dangerous consequences of the blockade:

1. Condemn in the strongest terms the sanctions imposed on the Gaza Strip. We draw attention to the inhuman and immoral nature of these policies which constitute a grave violation of international humanitarian law and human rights conventions.

2. We regard these sanctions on Gaza as a process of slow, programmed killing of its inhabitants and a violation of their right to life. It is a programmed destruction of what remains of their means of existence and their opportunities for a decent existence and secure future.

3. We strongly condemn the Israeli government for perpetuating the sanctions and its excessive indulgence in tightening them day after day. We hold the Israeli government responsible, being a partner in these policies for the victims and the catastrophic impact of the sanctions. This includes the international community that has ignored these violations and refused to intervene to stop them.

4. We draw the attention of all those concerned of their solemn responsibility and in this regard the Egyptian government to open the Rafah - Palestine Crossing given the fact that it is the only opening for the people of Gaza to the outside world.

5. We regard it as totally unacceptable that Europe should become complicit, directly or indirectly, in this policy of siege. We make this affirmation based on our recognition of the influence of the European governments in the region and the humanitarian and moral obligations they bear in accord with international treaties and conventions to protect human rights. We urge their immediate intervention to end these criminal sanctions and exert all forms of pressure necessary toward this end.

6. We urge the UN agencies, civil society bodies in Europe and internationally and all defenders of human rights and freedoms to raise their voices and double their efforts to bring effective pressure to bear in the interest of the rights of their fellow human beings in the Gaza Strip to health, education, life, movement and employment. They must all send a strong message to all the concerned parties that it is totally unacceptable that these policies should continue.

7. We declare that the sanctions imposed against 1.5 million Palestinians in the Gaza Strip would remain the focus of our concerted interest and we regard this a moral duty binding on all people of conscience everywhere.

Among the earliest signatories are:

2. The Muslim Council of Britain

3. The Palestinian Forum in Britain, UK

9. The Irish Association of Imams- Ireland

11. The Libyan Community in Ireland - Ireland

12. The Algerian Community in Ireland - Ireland

17. The Charitable Council in Support of Palestine - France

18. The Union of Islamic Organizations in Europe

19. The Palestinian Community in Norway

20. The Islamic Council of Russia - Moscow -

21. The Association of Social and Cultural Foundations - Moscow

24. The Association of Healthy Life - Siberia

27. The Palestinian Forum for Rights and Solidarity - Holland

31. The Association for Aid to the Palestinian People - Italy

32. The Union of Islamic Communities - Italy

36. Rights For All - Switzerland