Ninth Palestinians in Europe Conference due in Germany 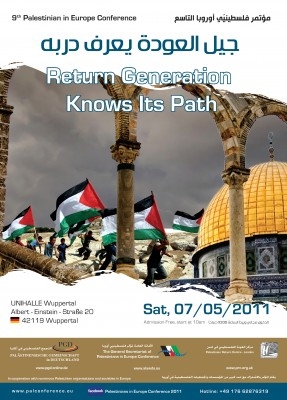 Huge arrangements and preparations are still taking place for the 9th Palestinians in Europe Conference scheduled for the 7th of May in the City of Duesseldorf in Germany.


It is the 9th in a series of annual Palestinian conferences in Europe.  It is organized by General Secretariat of the Palestinians in Europe Conference, Palestinian Return Centre (PRC), and Palestinian Assembly in Germany.

The conference this year titled; “Return Generation knows its Track” is expected to focus on the conditions of Palestinians across Europe and their roles in raising the awareness about their just cause and stolen land. Key roles will be given to the young generations who are taking considerable part in the event. Most of the participants will come from European states, especially Germany, where huge Palestinian community resides. The event coincides with the 63rd anniversary of the Nakba. The issue of Palestinian prisoners will be discussed during the conference in addition to other pressing concerns facing the Palestinians. Also, the separation wall and settlements will be at the core of the conference which will help in the development of a strategic and collaborative response to their impact. The organizers are also keen to discuss the significance of Arab revolution sweeping across the Middle East. Speakers from Arab countries, Egypt and Tunisia, will be participating and speaking about their experiences.

There will be key Dabka and Folklore performance from the Palestinian culture performed by Abda Al Fatah Uwainat and Khairi Hatem.