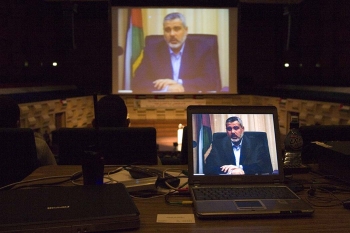 Holland, May 5th, 2007 (PRC) - The Fifth Annual Conference of Palestinians of Europe ended in Rotterdam on 5th May with a spectacular cultural display. Teenaged Palestinians born in several European countries held large-sized keys as an expression of their determination to exercise their right to return to their homeland.

Foremost among the dignitaries participating in the work of the Rotterdam conference were the Archbishop of Sebastia Dr. Attallah Hanna, the second Vice-President of the Palestinian Legislative Council, Dr. Hassan Krish, the President of the British Muslim Initiative Mr. Mohamed Sawalha and the human rights lawyer Mr. Ghassan Saleh.

Although an invitation was extended to the President of the Supreme Islamic Council and preacher of Al Aqsa Mosque, Sheikh Ekrema Sabri the occupation authorities barred him from traveling to Europe. This action was strongly condemned by the participating delegations. A similar invitation was extended to the Palestinian Prime Minister Mr. Ismail Haniya who despite the refusal of the Dutch government to grant him a visa managed to address the conference.

Amid a rapturous standing ovation Haniya spoke by video link from his Gaza office to the delegates. Haniya affirmed the unity of the Palestinian people in spite of the barriers of geography. He said, "I hoped to attend personally to be close to our brothers who still bear the love of Palestine despite the years and pain of exile." He added, "I wanted to participate, carrying all the love and commitment of Palestine and its people wherever they may be." The Palestinian Prime Minister thanked the members of the Dutch government who supported his request to attend the conference, saying “this shows that there are still many voices of reason, conscience and solidarity with us."

Ismail Haniya spoke of the unjust and oppressive siege against the Palestinian people and their elected government. He said the one-year blockade had failed to dislodge or force his government to make concessions as they were intended. Instead he paid tribute to the determination of the Palestinian people and the success they had achieved with the signing of the Makka Agreement

The Fifth Palestinians in Europe Conference coincided with the 62 anniversary of the liberation of Holland from Nazi occupation. Haniya used the occasion to note that the Dutch celebration of their liberation constituted a source of strength for the Palestinians to continue struggling to win their own independence.

Former Dutch Prime Minister Mr. Dries van Agt attended the conference and commended the work of the Palestinian communities in Europe. He appraised the work of the international Quartet and condemned as unjustified the blockade imposed on the Palestinian people and government since the legislative elections of 25th of January 2006. The former prime minister said the sanctions were based on double standards and inconsistent with the principles of even-handedness, impartiality and justice. He said they represent a blatant bias in favor of the occupation government at the expense of the Palestinian people and their democratically elected government.

With respect to the west of dealing with Hamas, van Agt said that, "without entering into negotiations with the elected Palestinian people there can be no meaningful progress toward a settlement.” He endorsed the views of former American President Jimmy Carter and former Israeli foreign minister Shlomo Ben-Ami.

In his address Van Agt denounced Israel’s policies in the Occupied Territories saying that, "innocent Palestinians are being treated like animals and criminalized because they voted for Hamas.

The charismatic Palestinian religious figure, Bishop Attallah Hanna in his remarks stressed the need for justice for the Palestinian people and the importance to stand by their inalienable rights, emphasizing that he came to the Palestinians in Europe conference in Rotterdam with a message of hope and steadfastness. He said, "I am very happy to be with you in this Palestinian wedding to reaffirm together commitment to our just cause, adhere to our national constants in Jerusalem as the capital of our independent national state and adherence to our right of return which is no less sacred than our right to Jerusalem. "

Hanna said, "I greet you all on behalf of the city of Jerusalem to say no, a thousand times no to the occupation and colonization of our land and our holy sites." Archbishop Hanna added, "solidarity with the Palestinian People is a moral and humanitarian duty.”

Bishop Hanna drew attention to the fact that "the history of peoples is not measured in decades. We are not in a hurry to accept an unfair settlement. Neither do we want agreements or treaties that do not fully restore our rights." He assured the conference, "do not despair. Our cause is just, even if we are accused of being terrorists." The real terrorist he said is the Occupation.

Archbishop Hanna said he was confident that the Palestinian people would achieve victory and freedom. "God willing, the day will come when we together would raise the Palestinian flag over the mosques and churches of Jerusalem.

Despite the sudden withdrawal of his entry visa into Holland the Palestinian Minister of Youth and Sports Dr Bassem Naim spoke by video link to the conference. He condemned the decision to withdraw his visa in Brussels as an "unjust decision.” Dr Bassem Naim questioned the morality and legality of denying food and medicine to the children, the sick and elderly.

Dr Bassem Naim who had previously lived in Europe for 10 years said the decision taken against did not reflect the pulse of the Dutch street or its citizens.

Turning to the current political situation Dr. Naim pointed out that the Palestinian issue had now reached a critical juncture. He added, "we are determined to achieve independence and freedom for our people, like all other peoples."

In a gesture of strong support the conference delegates announced an initiative to raise one hundred and fifty thousand Euros (approximately one hundred and eighty thousand dollars) to establish a youth center and athletics ground in the Shati refugee camp in the Gaza Strip.

Meanwhile, the Secretary General of the Palestinians in Europe Conference called on all Palestinians in Europe to join forces and mobilize resources in order to meet the huge challenges that stand before their cause. In his speech at the delegates Abdullah said, "we maintain that the Palestinian people scattered in their various locations inside the country and outside are one and indivisible with a common destiny."

In regard to the situation of Palestinians on the European scene Adel Abdullah said, "We have all come her under a single agenda of promoting unity.” The Secretariat of the Conference he added was determined to enhance communications between the sons and daughters of our Palestinian people throughout the European continent, foster cooperation between their institutions, associations, federations, and encourage the widest possible involvement for the good of Palestine.

In his speech to the conference the Director-General of the Palestinian Return Center, Majed Al-Zeer, recalled the founding of the Conference and its early initiatives five years ago. He said, "we have come to the Netherlands, on the anniversary of Nakba, carrying Palestine in our hearts, retaining it in our eyes. We remain steadfast to our birthright in Palestine.”

Al-Zeer said, "today from Rotterdam we send warmest greetings to our people everywhere. Here from the Netherlands, a country which rejected Nazi occupation and won its freedom won, let us go back from here once again as we did from London, Berlin, Vienna and Malmo asserting with full confidence that the right of return is non-negotiable and inalienable.Majed Al-Zeer stressed the need to expedite the lifting of the unjust blockade imposed on the Palestinian people and its government. Such efforts should not be delayed. He recalled in this regard Europe’s historic commitments toward the Palestinian people.

With regard to ongoing work among Palestinians in Europe Al-Zeer said, "we will maintain our strong alliances and partnerships with in European civil society bodies to demand for an end to the sanctions and blockade against the Palestinian people as well as the full recognition of their legitimate rights to freedom and independence.

Al-Zeer called for free and direct elections for Palestinians in Europe in order to attain effective representation. "There is no meaning for the continued exemption of broad sectors of our people of their responsibilities," Al Zeer said. "The Palestinian people who elected their representatives in the Occupied Territories are the same Palestinian people abroad." In his speech Al Zeer also touched on the issue of reform of the PLO and its institutions on the basis of democracy and transparency.

Chair of the Forum of Palestinian Rights and Solidarity in the Netherlands, Amin Abu Ibrahim, said the Palestinians in Europe Conference would continue to advocate for the exercise of the right of return. He said there would come a time when the doors will be opened for them to return to their villages and towns from which they were expelled in 1948.

The Chair of the Forum of Palestinian Rights and Solidarity said, "there is no doubt that this high attendance at this year’s conference is the practical embodiment of its theme (despite distances and pain: one people with established rights). This is what inspires our confidence, he added.

The Rotterdam conference final document addressed the attitudes of certain European governments toward the right of return and other key aspects of the of the Palestine issue including; sovereignty, prisoners, settlements and the apartheid wall.

Vice-President of the Palestinian Legislative Council, Dr. Hassan Kresha told the Rotterdam conference, "we should look of options, including a reappraisal of the national authority itself. He said certain European governments were collaborating with the Americans to blackmail the Palestinian people into making political concessions on their fundamental rights.Chair of the British Muslim Initiative, Mr. Mohammad Sawalha spoke about the role of Arabs and Muslims in Europe in supporting the Palestinian cause, particularly at this critical juncture.