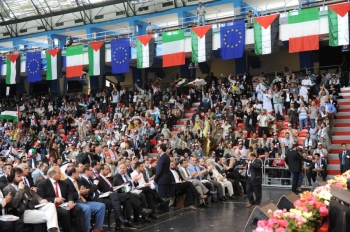 The Seventh Palestinians in Europe conference concluded with distinct success under the theme “Return is a right, no Consent and no Concession” on 2nd May 2009 in Milan, Italy.
Thousands of Palestinians from all over the continent participated in the work of the conference attended by prominent Palestinian leaders from the Occupied homeland and abroad, in addition to a large number of public figures and representatives of Arab, Islamic and European institutions and solidarity forces.

The Seventh Palestinians in Europe conference held in Milan:

* Reaffirms the resolutions adopted in the previous six Palestinians in Europe conferences which were convened in the presence of their associations, institutions, unions and public in London (2003), Berlin (2004), Vienna (2005), Malmo (2006), Rotterdam (2007) and Copenhagen (2008),

* Witnessed wide-ranging deliberations, consultations and activities with the participation of a large cross-section of Palestinian communities from across Europe,

* Recalls the unity of their condition and destiny with the generality of Palestinians wherever they exist,

* Adopted the theme for the annual commemoration and 61st anniversary of the Nakba, “Return is a Right, no Consent and no Concession”,

* Commends particularly the efforts of the Palestinian community in Italy who worked in collaboration with the Islamic and Arab communities and friends from the wider Italian society to convene the conference and guarantee its success with the help of Allah Almighty,

* Salutes the participating Palestinian communities from across the European continent and guests from the Palestinian homeland and diaspora,

* Appreciates the distinguished efforts undertaken by representatives of European, Arab and Islamic institutions and organizations in this conference with special references to the efforts of the Arab and Islamic communities toward its success,

* Recalls the historical challenges which the Palestinian people surmounted and the ongoing events witnessed by their all embracing issue,

Announces the adoption of the following resolutions:

TWO – Reaffirms adherence to their right of return to their homes from which they were expelled, emphasizing rejection of all efforts aimed at undermining this right, overlooking it or conceding it, emphasizing that they will never compromise on the right of return to Palestine and they do not mandate any individual or party whatsoever to concede, bargain or divide it. The Palestinians in Europe demand the swift implementation of their right of return by enabling them wherever they are domiciled to return to their homeland and lands with compensation for all the losses and damages suffered by their predecessors and subsequent generations – psychological and material – caused by their cruel expulsion and long years of exile and dispersal.

THREE – Recalls the criminal war of aggression launched by the Israeli war machine against the Palestinian people in the Gaza Strip for twenty-three days during which they perpetrated widespread massacres, war crimes and atrocities against Palestinian civilians among them children, women, elderly and sick before the eyes and ears of the world. The Palestinians in Europe mention with immense pride the steadfastness of the Palestinian people in Gaza which witnessed an extraordinary human encounter in which the forces of resistance, adherence, honor and human dignity succeeded despite the enormity of sacrifices. The Palestinian people at this historic juncture deserve due recognition and support of the world conscience as well as those who love freedom and justice and the justice of their cause.

FOURTH – Condemns the official stand of certain European countries which sent the wrong messages concerning the overall position of Europe toward the war against the Palestinian people in Gaza and siege imposed against them. The Palestinians in Europe warn that these policies which cannot be regarded as representative of the people of this continent and the values they take pride in have raised doubts about the credibility of European politics and its human rights policies, which require action and effective rectification. Any stance contrary to this shall not be condoned under any circumstances.

FIFTH – Notes a disturbing deterioration in European foreign, military and security policy which choose to align itself with the tyrannical Israeli power at the expense of human rights and justice. This became evident during the war of aggression on the Palestinian people in the Gaza Strip. Everything confirms that the Israeli Occupation has interpreted these stands to mean the legitimization of their aggression against the Palestinian people. It has capitalized on them to further its heinous war crimes and consider them a form of support for its belligerent policies aimed at subjugating the Palestinian people, attacking their dignity and breaking their will.

SIXTH – Alerts all officials and decision-makers as well as architects of public opinion in Europe that the Palestinian people have paid a huge price as a result of the official European support for the Israeli war machine whose victims have been children, women, elderly and sick in the most ruthless manner. While all of this was perpetrated within the framework of political, military and security support and the intensification of the siege on the Gaza Strip, the West Bank witnessed an increase of restrictions and ethnic cleansing campaigns in Jerusalem as well as the spread of racist campaigns against the Palestinian people in the territory occupied in 1948.

SEVENTH – Recalls that effective participation in the reconstruction of the Gaza Strip signifies a consequence of the Israeli war of aggression, noting the importance of not subjecting this to any form of political exploitation or its utilization as a bargaining chip against the Palestinian people. The Palestinians in Europe also alert that the calls for participation in the reconstruction of Gaza would not by themselves succeed in rectifying European policy toward the Palestine issue or improvement of its image, that is because the moral and human responsibility imposed on the European officials requires that they persist in exerting their influence to end the Israeli aggression, destruction and catastrophes before it s too late.

EIGHTH – Emphasizes the need to subject the Occupying Power to scrutiny and accountability of its leaders for war crimes and grave breaches of international humanitarian law, ensuring that the Israeli war criminals will not evade the retribution of international jurisdiction. The Palestinian people welcome all legal initiatives aimed at pursuing the Israeli war criminals. They assert their support for those initiatives.

NINTH – Monitors with grave concern the insistence of the Occupation to enforce the politics of fait accompli in Palestine with the construction of settlements, expansionist wall, the expropriation and theft of land, destruction of homes, obstruction of building, disruption of the lives of Palestinian civilians in their movement and daily sustenance and transformation of residential areas into scattered and isolated islands and closures of the windows of hope.

TENTH – Endures with immense anxiety the escalating attacks which the Israeli occupation unleashes by various means on Jerusalem on the legitimate Jerusalemite population with the rise of collective expulsion and destruction of homes. Likewise the Palestinians in Europe warn against the institutional racism which the Occupation Power deliberately practices against the Palestinian population of Jerusalem and its confiscation by various means of their identity documents and denial of residence in addition to the encirclement of Palestinian residential areas in the city with settlements and the racist separation wall.

ELEVENTH – Warns of the consequences of damage to the blessed Al Aqsa Mosque, desecration of its sanctity and the Islamic and Christian endowments in Jerusalem, not to mention the consequences of the systematic aggression on the historic and civilizational symbols of Jerusalem, the capital of Arab culture, destruction of its cultural identity and disfigurement with settlement projects and accelerated excavations.

TWELFTH – Reaffirms their condemnation of the criminal siege of the people in Gaza Strip, and warn of the consequences of this organized crime and flagrant violation of all human rights and moral standards, which include the denial of the most basic necessities of life to one and a half million people. The Palestinian people in Europe demand from all those involved an immediate end to this siege. The end of the siege is a veritable test of Europe’s commitment to human rights. This is also a direct responsibility of Arab and Islamic countries, foremost among them the Egyptian Arab Republic and its duty to break the siege and open the Rafah Crossing.

FIFTEENTH – Emphasizes that with the participation of the forces of truth and justice in this continent the Palestinians in Europe will continue their efforts aimed supporting their people and alleviating the pains caused by Israel’s war of aggression, criminal siege and oppressive restrictions. Thus the ships that seek to break the siege will continue to sail and the fraternal solidarity convoys and delegations will continue to follow each other. All programs, projects and construction initiatives will increase with the help of Allah Almighty in reaffirming the unity of our condition and the march of our Palestinian people wherever they are.

SIXTEENTH – Endures with immense pain the struggle of the Palestinian refugees in Iraq and those displaced after its occupation and the attendant disasters, victimization, expulsion and banditry. This calamity necessitates the intervention of all concerned parties to end the suffering and close this chapter in a manner consistent with adherence to the Palestinian right of return to their homes including within the territory occupied in 1948 and also consistent with human rights, dignity and the civil and social liberties of the Palestinian people wherever they are.

SEVENTEENTH – Recalls the suffering that has befallen the Palestinian refugees in Nahr al Bared refugee camp after the destruction of their homes and expulsion rendering their condition a matter of Palestinian, Lebanese, Arab and international concern, which necessitates the urgent reconstruction and preservation of the camp’s identity, noting that the camps constitute the address of return and point of departure for the returnees to their usurped Palestinian homeland.

EIGHTEENTH – Reaffirms the view that the European continent bears historical responsibility for their catastrophe. This cannot be contested with all the obligations that his entails as a result of the Nakba inflicted upon the Palestinian people in 1948 and for which successive generations continue to pay the price of until today. Indeed the European governments bear a special responsibility for maintaining this project to occupy Palestine and enabling it to continue its expansion and aggression.

NINETEENTH – Asserts that the issue of Palestinian repatriation, self-determination, liberation from occupation and independence in their historical homeland requires the support of all those who stand on the side of justice, defenders of truth and supporters of humanity. The Palestinian people regard with profound appreciation the fraternal efforts and solidarity efforts with their cause in Europe. They regard this as an additional asset to the values of truth and justice in this world, which will have a decisive impact on the Palestinian people and support for their just cause.

TWENTY – Appreciates with immense pride the steadfastness of the Palestinian people and sacrifices of the martyrs, the injured, the prisoners and all those who defend the homeland and sacred sites. The Palestinians in Europe acknowledge the efforts of those who safeguard their rights, freedom and dignity. Their continued efforts pave the way to repatriation, self-determination and liberation from occupation and the establishment of full sovereignty in their homeland.

The final communiqué of the Seventh Palestinians in Europe Conference

Convened under the theme “Return is a right, no Consent and no Concession”