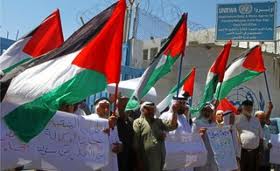 The Palestinian Return Centre (PRC), advocating for the rights of Palestinian refugees worldwide, views this UN bid for recognition as a move that will greatly harm the rights of millions of Palestinians around the world and weaken the only legitimate political entity that speak on their behalf, the PLO. Our position echoes that of many eminent legal experts, who also see this as another misconceived initiative that will, in the long term, do more harm than good.


Given the current deadlock in diplomatic process, it’s understandable why any move is seen as a positive step. Crowning victories in such diplomatic skirmishes however leaves   Palestinians gravely wakened in fighting for truth and justice for all the Palestinian people. The centre believes any such efforts should have been preceded by some form of National Reconciliation which would have produced  national consensus.

The centre has looked at this very  carefully, even organizing seminars and debates about the issue within Palestinian communities around the world. The centre is in no doubt that such a move will prejudice the Right of Return as well as the representation of the PLO, the only true representative of the global Palestinian population.  The move is a hasty reaction to failures in political negotiations.

The centre, like the UN, believes that it is the Palestinian people who are the principal agent, it is they who can rightfully decide their own fate and Palestinians should not be forced to accept a fait accompli .

General Director of PRC, Majed al Zeer, believes  the bid is not well-structured and might have repercussions on many levels and posterity will judge this, like Oslo, as another moment when Palestinians mortally wakened themselves in their campaign for truth and justice.

“While  appreciating the merits of such a move, they pale into insignificance when all considerations are taken. In the long term the merits are a mirage and the move will only weaken our basic rights and our major political institution. There is still a division in the Palestinian street between the key parties.  Refugees in the Diaspora were not consulted. Many International legal experts suggest that this will weaken the position of Palestinians in diasporas. It is the Palestinian people who decide their own future and not any single party or person”. says al zeer