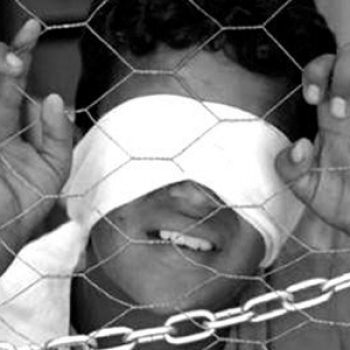 The Palestinian Nakba is still ongoing and will continue to go on until we Palestinians have achieved our independence and freedom. The history of the Nakba began with the emergence of Zionism as a colonial and imperial discourse and the process of Judaization of Palestinian sites so to eradicate the Palestinian memory and national identity from the social fabrics of society, through the process of ethnic cleansing, terrorising and intimidating Arab inhabitants to flee their homes and livelihoods.
The militarisation of Israeli society played a prominent role in constructing artificial state boundaries through the use of settlements and military operations, employing tactics of suppression and interrogation which form the backbone of the Zionist ideology. The Zionist space was to be achieved through a clear policy of fixing borders and seizing land. So the politics of Zionism in Israel’s re-mapping of territory is dependent upon separation, control over natural resources and the utopian vision of an exclusive Jewish state.

1948 witnessed the tragedy of the Palestinian people. 750,000 Palestinians were forcefully driven from their homes and with the creation of the state of Israel, saw their homeland fall into foreign hands. This cataclysmic event has meant that today Palestinians comprise one of the largest groups of refugees. In fact three quarters of Palestinians are refugees and one third of Palestinian refugees still live in refugee camps.

The Israeli process of fabricating history, changing landscape and creating facts on the ground is a process deeply rooted in Zionist discourse and continues to manifest into new forms of power that seek the denial and articulation of Palestinian infrastructure and existence. Israeli settlement activities are organised to fragment Palestinian society and to divide the community into enclaves. The settlements will eventually be kept cut off from their surroundings, denying the Palestinian’s existence through the use of Israeli bypass roads and separation barriers thereby fragmenting and encapsulating the West Bank terrain. This illustrates the coercive and racist attitude of the Israeli state, its double standards and the ultimate goal to take complete territorial control and dissolve the Palestinian infrastructure.

The process of establishing Israeli presence and Land acquisition in the West Bank developed a political architecture of separation and denial in Israeli settlements. Temporary settlement outposts became permanent Jewish colonies. Since the state of Israel has carried out a policy of illegal settlement activities, today there are now 440 settlements in the West Bank and Jerusalem, meaning there is a population of 500,000 Israeli settlers living today on Palestinian land.

Israel’s refusal to accept the ten month partial settlement freeze is the main obstacle to the continuation of peace talks. Of course the USA’s current stance remains unconvincing. Action must be taken to put an end to illegal settlement activity when US support is essential to pushing through to the UN security council resolutions, condemning settlement activity, it must stand up for international law. We Palestinians must continue to fight for a complete end to these illegal colonies and look to begin the removal of colonists from what is rightfully Palestinian land. Moreover, Israeli incursions and intrusions are taking place not just within the West Bank. The Israeli takeover of East Jerusalem is a total breach of International Law. Article 49 in the Fourth Geneva Convention, prohibits the occupying power to transfer citizens from its own territory to the occupied territories. The demolition of the Shepherd Hotel recently is part of a plan to build new homes for Jewish settlers; this is an example of the continuation of Israel’s illegal colonisation campaign.

The establishment of these destructive settlements threatens the continuity, integrity and viability of the Palestinian territory. This unlawful activity has been condemned time and again by UN resolutions and UN spokespersons and has even been described by the US as only a disturbing development.

Through a process of spatial fracturing the Israeli state is able to restrict movement and accessibility through the territories. Settlement blocks, the apartheid wall, separate network roads, checkpoints, and permit systems are all mechanisms of control that fragments and marginalises Palestinian society. For example, take the building of the apartheid barrier, 709 kilometres long, consistently breaching the green line. This wall further isolates Palestinian communities and forces them to live in enclaves, thus disjoining Palestinian land. The wall is used to exert power over the people who must live in its shadow, creating an atmosphere of fear, apprehension and Israeli hegemony. Not only is it a physical symbol of Israeli incursion, it has led to the loss of basic human rights, such as the freedom of movement. Israeli checkpoints impinge upon the freedom of movement for Palestinians, thereby controlling and regulating society. It performs a visual function of dominance. At the same time it persists with its aggression against the Palestinian civilian population in the occupied territories, continuing to deliberately violate their human rights and to cause loss of life and injury.

The blockade of Gaza is illegal it is an attempt to drive a wedge between the Palestinian people but this will not split our people, we are strong, we are united and we remain committed to achieving justice for Palestine.

As our brothers in Palestine continue to be oppressed we must articulate the cause in the international media. Abdallah Abu Rahmah, a peace activist from Bil’in must gain as much exposure as possible, not only to help him as an individual but to demonstrate to the world that the Palestinians are engaged in a widespread non-violent movement. This is how we will counteract the propaganda from Israel that we are all “terrorists”.

The crimes committed in 1948 against Palestinians caused numerous deaths, suffering, destruction to the environment and the expulsion on a mass scale. All of which is being repeated today in the 21st century by the state of Israel under the eyes of the international community. Israel is continuing its demonization of the Palestinian people, eradicating its infrastructure and recreating facts to deny the existence of Palestinians and free itself of any responsibility. We must learn from the trauma of the past and not allow history to repeat itself.

To secure a viable a peaceful solution to the region, we must support International Law and hold Israel accountable for all the injustices committed. Palestine will never be a safe place nor a place where freedom is exercised and where democracy can flourish until Israel’s occupation is dismantled and Israel meets its fate. We must strive for an end to this illegal occupation and the welcoming of an independent Palestinian state.

Today, we see a stronger civil society that has witnessed the atrocities committed by the state of Israel. Our strenuous efforts have helped expose the injustices in Palestine and called for a just solution. Therefore, in solidarity, we campaign for a secure future for Palestine, together we have what we lacked over 60 years ago, a unified movement that seeks the freedom and self determination of the Palestinian people. From what we have achieved and the hope that we carry, collectively, we can put an end to 63 years of the ongoing Nakba.