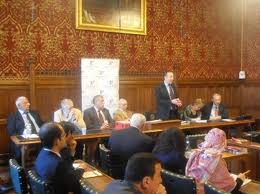 
The event was chaired by veteran labour MP, Sir Gerald Kaufmann, who was joined by several other members of parliament in a full committee room.

Monday’s seminar is part of a series of events organized by the PRC with its partners around Europe during World Refugee Day (20 June). PRC Delegates will be going to Geneva to address the UN during the Human Rights Councils second session on Friday. Its senior researcher, Mr Nasim Ahmed, will also speak at a public gathering in Oslo, organized in partnership with The Norwegian Center against racism.

Sir Gerald, opened the seminar through an impassioned speech about his visits to refugee camps and the importance of keeping this issue alive on the political agenda.

PRC representative and chair of the PRC Board of Trustees, Muhamed Hamid, spoke on the theme of this years refugee day, “refugees have no choice  you do”.  He reminded everyone that “7 million Palestinians share their plight with 44 million displaced persons around the world and that the choices of Palestinians were taken away 64 years ago. They have been uprooted and forced into exile and denied the choice that is a right of all human beings, to return to their land and home”.

The three other parliamentarians, Andrew Love, Andy Slaughter, Jeremy Corbyn, who visit Palestine regularly, spoke about their continued involvement with the just cause of the Palestinians.