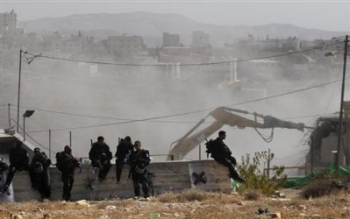 An Israeli soldier accused of shooting a Palestinian mother and daughter who were holding a white flag during the 'Cast Lead' operation in the Gaza war in 2009 has been sentenced to just 45 days in jai
l, after reaching a plea bargain with Israel's Military Advocate General (MAG), Israeli media and human rights groups reported on Sunday.

Raya Abu Hajaj, 64, and her daughter Majda, 37, were killed while in a group of Palestinian civillians carrying white flags, in the Gazan village of Juhor al-Dik, on January 4th 2009, the first day of Israel's ground invasion of Gaza during Operation Cast Lead.

The civillians were obeying soldiers' calls to leave their homes, which followed the shelling of the Abu Hajaj family home, Israeli human rights group B'Tselem said. The family told B'Tselem that they were not able to remove the women's bodies until 19th January, due to the shelling of the area.

The Israeli soldier was originally indicted for killing an unidentified individual by the Israeli MAG, but will be charged with the lesser offense of "illegal use of weapons", following the plea bargain reached between the MAG and the soldier's lawyers.

Evidence presented in the case proved that the Soldier, known as S', had shot at the civilians, in contradiction of orders. However, his lawyers argued that there was no evidence linking the death of the two women and the soldier's shooting, and stated that the two events occurred at different times, according to Israeli newspaper Haaretz.

An IDF spokesperson told Haaretz that "after examining all the evidence and circumstances, and following the military court's recommendation, both sides reached a plea bargain that would see the indictment corrected to illegal use of weapons."

Following the decision, B'Tselem has demanded that an investigation into the deaths of Raya and Majda Abu Hajaj be reopened. In a statement released on their website on Sunday, they said that if the military prosecutors had accepted S's lawyers' claims that his shooting and the deaths were not connected, then the investigation into the two deaths had never been completed.

B'Tselem, who investigated the event and collected witness testimonies, had previously warned the MAG's office in July 2010 that the decision to indict S' for killing an unknown person was "problematic".

The incident is one of the most significant and controversial ones mentioned in the UN-commissioned Goldstone Report, a 575 page report authored by South African Judge Richard Goldstone that was released in 2009.

The report caused controversy in Israel when it was released, and concluded that Israel committed "grave breaches of the Fourth Geneva Convention in respect of willful killings and willfully causing great suffering to protected persons."