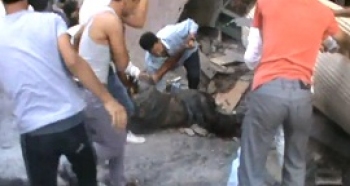 Seven Palestinians were killed on Thursday as the Syrian army bombed the Yarmouk refugee camp in Damascus, sources in the camp said.


Forces loyal to President Bashar Assad bombed Safad and al-Jaouna areas and the al-Basel Hospital, local Yarmouk media reported, adding that residents of the camp would protest the shelling outside the al-Waseem Mosque after evening prayers.At least 20 people were killed in Syrian army mortar and artillery bombardment in southern Damascus, residents and local emergency workers said.Yarmouk camp and the districts surrounding it have seen the most prolonged fighting in the capital since forces loyal to Assad launched a counter-offensive to push rebels out of the city two months ago.Residents in the camp said that for the last two weeks Yarmouk had been closed off from neighboring districts and that they had heard regular clashes. Since early on Thursday they reported heavy bombardment in the area.They said the army may have intensified its attack on the district in the belief that rebels, who have been sheltering in the nearby neighborhoods of Tadamon and Hajar al-Aswad, were slipping into Yarmouk, whose Palestinian residents are suspected by authorities of siding with the rebels.Assad's forces are trying to re-establish full control in Damascus as well as fighting rebels in the northern city of Aleppo. Persistent air strikes and bombardment of rebel-held areas in northern and southern provinces in the country, have prompted waves of refugees to flee to Turkey and Jordan.In the southern province of Deraa, rebels said 45 army tanks were sent to the border town of Tel Shehab, an anti-Assad stronghold which has served as a transit point for refugees crossing into Jordan.They said rebels withdrew from the town before the army offensive started. "No shots were fired. There were no clashes," rebel fighter Abu Younis said. Four civilians were killed, a relatively light toll, he said."They have burnt homes of several activists but they are only entering homes of known activists and families harboring the rebels. Over forty people have been arrested," he said.Another rebel fighter, who called himself Abu Omar, said the army offensive had been brief."The security forces have retreated from the center of the town but are on its fringe right now and there is a column of tanks on the highway leading to the town," he said.