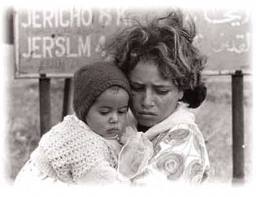 For former Jordanian citizen Akram abu al-Reish the reality of finding himself overnight a stateless person without any documentation to prove his legal existence was a very harsh reality that he and his family had to contend with since 2008. Although he was born and raised in Jordan and of Palestinian origins, his ordeal started when he was summoned to the Jordanian Interior ministry and was ordered to surrender his Jordanian passport, his driver license and his national number.


He was offered no explanation, and practically was kicked out to the street. He however had in the early nineties acquired a Palestinian ID card and had married a Palestinian citizen from the West Bank during his visits to family members there. His Palestinian ID card however is not considered a Palestinian citizenship or passport as to there is no such thing as a Palestinian state at this point and has no legal implications on his Jordanian citizenship in accordance with the Jordanian law.Revoking the citizenship of Jordanian citizens of Palestinian origins started when the late King Hussein severed the legal and administrative links between Jordan and its own occupied territory of the West Bank in July of 1988. King Hussein was motivated then by regional pressure and by the need to end the struggle between Jordan and the PLO over the representation of the Palestinian people and the issue of Palestinian statehood.As far as citizenship, the King stated in his speech that whoever in Palestine at that time will be considered Palestinian (non-Jordanian citizen) and whoever in Jordan is a Jordanian (including Jordanian with roots in the West Bank).Although King Hussein speech did not and could not carry the force of the law and inherently unconstitutional, it was however, followed by “legal instructions” which are the lowest level of the legal code in Jordan and were followed by “ secret interpretations” put forward by the interior ministry officials to decide how to enforce the king’s “unconstitutional” decision. For Abu al-Riesh however, he was at that exact time serving in the Jordanian armed forces which was mandatory for Jordanian citizens and was never a resident of the West Bank therefore he should not have been stripped of his citizenship. In the view of Bassam Badareen who is one of the foremost experts on this issue in Jordan and the bureau chief for London-based Al Quds Al Arabi, this case and many others like it is an outright discrimination against Palestinians in Jordan. “Denationalizing Jordanian citizens is carried out by secret instructions by a secret committee within the intelligence and security agencies and its sole purpose is to scare the Palestinians in Jordan from demanding their civil and electoral rights. Badareen has chronicled numerous cases of Palestinians in Jordan who were arbitrarily stripped of Jordanian citizenship and is part of a group of activists who demand that the government restore the citizenship of those who were arbitrarily denationalized. Member of Parliament (MP) and Palestinian leader Mohammad al-hejouj of Zarqa and one of only 17 Palestinian MPs out of 120, told me that he formally questioned the government and the minister of the interior over the constitutionality of his actions, but he only got “evasive and manipulative answers.” MP Khalil Atieh of Amman who is also one of the top Palestinian leadership in Jordan ,described what happened to abu al Reish and many others like him as “unjust “ and “unconstitutional.” When I asked him if he addressed such issues with the King personally, he answered that he did. “The King has ordered the end of this unconstitutional practice and has ordered the restoration of citizenship to everyone.” He said. “But there are powerful and racist anti-Palestinian groups in this country who feel that are more powerful than the King himself and will not even carry his orders.”It’s worth noting, however, that Palestinians in Jordan constitute over half of the population and contribute significantly to the national economy, yet they have very little political power as far as their membership in the Parliament or within the government bureaucracy. According to Badareen, the Palestinians in Jordan constitute around 80 % or the tax base which amount to about $ 3 billion year which in turn bankroll the entire Jordanian public bureaucracy. The behavior of the Jordanian government vis-à-vis its Palestinian constituency defies logic. For any normal and fully developed nation-state, citizens or even foreigners are encouraged to invest and remain in the country. In Jordan, however, the government tries to destroy its most important economic asset which is its Palestinian segment of the population. For abu al Riesh, revoking his citizenship has almost ruined his $ 10 million a year car business and complicated his family life and his children lives who found themselves without documentation to even register for school. He is considering leaving the country and immigrating to Europe or the United States. Jordan is a fragile state and is one of the poorest countries in the region with no real economy and has almost total dependence in its political survival on the financial and economic assistance of the United States and the Gulf Arab states. The rising anti-Palestinian sentiments in Jordan coupled with the government actions, and the proliferation of automatic weapons and armed gangs, has alarmed the new and rising political and intellectual leaders of the Palestinian community in Jordan.For those leaders who on one hand stress their loyalty to Jordan and their commitment to law and order, they however call on Palestinian capitalists and industrialists in the country to divest from the Jordanian economy and Palestinian population to disengage from the political system altogether. For those leaders and many others within the Palestinian community there is a major fear and uncertainty, real and imagined, about their future in Jordan. MP al Hejouj meanwhile agrees that things are going from bad to worse, but he calls for calm and asserts that “the King is the only safety valve in the country.” For MP Atieh however, things are not as alarming. “Should law and order breaks down in the country whereby powerful tribes threatened the monarchy, The Palestinian people of Jordan will stand by the King and the Hashemite family, there is no question about that.”- Ali Younes is a political analyst based in Washington D.C. He contributed this article to PalestineChronicle.com. Contact him at: aliyounes98@gmail.com, and @clearali)