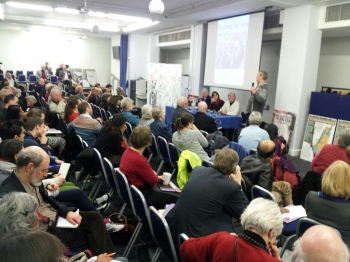 
It also commenced the 4th Palestine Memorial Week in the United Kingdom where a number of events are due to take place.

An international Conference was held on the 19th of Jan 2013 which was the launchpad of a week events around UK.

According to Nasim Ahmed, conference  chair, Britain's historical footprint in Palestine is fossilised for centuries.

“Britain has left an indelible mark on Palestine and its disastrous repercussions are still felt now. In enforcing the Balfour Declaration, Britain sold out human right, self determination and representative government to privilege, not just a small Jewish community in Palestine but Zionism, which, just as significant, was a minority movement within the Jewish tradition itself.” Stated Ahmed

The case of the recent Mau Mau legal battle for compensation was presented and broached as a framework that could be developed and used for Palestinians.

The two morning sessions looked in detail at the motivations and political considerations that lead to the Balfour Declaration. In the two afternoon sessions, four different presentations provided many ideas on developing a five year campaign, which at its core was about restoration for historical injustice.

PRC is hopeful that the Balfour campaign will gather momentum over the coming months and years. It is encouraged by others who have launched similar campaigns. It hopes that with enough coordination and energy, it will galvanise people around the world and develop the support and mechanisms to judge Britain through the court of public opinion and more.

The memorial week will include a number of events across different universities in the UK, including the University of Greenwich, Imperial College, Kings College and Brunel University

A film screening highlighting the plight of Palestinian Refugees from Iraq titled, “Displaced in Diaspora” will be shown on 25 January 2013 from 6:30PM to 9:00PM. Event venue for the screening is: Hend House, 233 Shaftesbury Avenue, London, WC2H 8EH