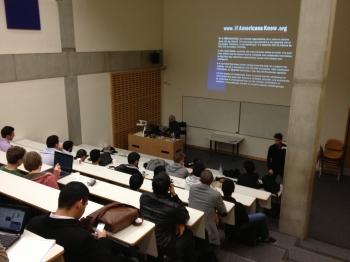 
The week, which commenced on Saturday the 19th of January with a conference on Britain’s Legacy in Palestine, was followed by a number of events at universities and public institutions around UK.

Saturday’s conference on Britain’s Legacy in Palestine launched a five year Balfour Campaign to mark the forthcoming centenary of the Balfour Declaration in 2017. It gathered MPs, academics, experts, activists and people from the general public.

The Balfour Campaign was discussed in detail and we are encouraged by the early support from many different Palestine solidarity groups and student unions in London. We hope through the continuous effort and support of our partners more people will support the Balfour Campaign.

The campaign calls on Britain to apologize for its historical mistake and make reparations to Palestinians who endured human rights at British hands.

Following the international conference, PRC representatives and guest speakers from the conference gave presentations to student societies in London, through the successful partnership between PRC and student unions.

Since its inauguration in 2009, the annual Palestine Memorial Week has been warmly received around the country and spurred a week of intense activism.

PRC partnered with Kings College, Greenwich University and Imperial College to deliver its key message this year and to galvanize grass root support for its Balfour Campaign.

This year’s event also saw the screening of PRC’s recent documentary, Displaced in the Diaspora. The documentary, which won a prize at the Union of Arab Broadcasters, follows the plight of Palestinian refugees since their expulsion from Iraq in 2003.

The documentary is one of the initiatives to come out from the Five year involvement by PRC with the Palestinian refugees from Iraq. PRC sent numerous delegations to the region as well as to host countries such as Brazil and India to compile a documentary evidence of their ongoing plight.