International Conference: The Impact and Future of Oslo 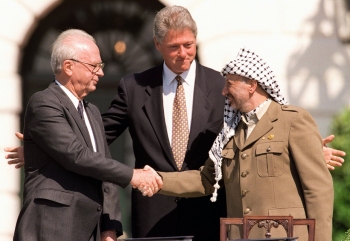 International Conference: The Impact and Future of Oslo Sep 2013 London

The Palestinian Return Centre (PRC) will be hosting a two day conference to mark the 20th anniversary of the Oslo agreement.

The conference will review its impact on core Palestinian issues and its future as a framework for resolving the conflict.

The agreement between Yasser Arafat and Yitzhak Rabin in 1993 set the principals and Interim Self- Government Arrangement for Palestine.

The two day conference will explore in detail the structural problems within the Oslo agreement, its impact and future.

It will unite experts in various fields from around the world, to present their findings on final status issues – refugees, Jerusalem, borders, settlements - as well as other related issues; water, Palestinian Authority, security.

A number of sessions will also analyze the historical road to the Oslo agreement and its future.