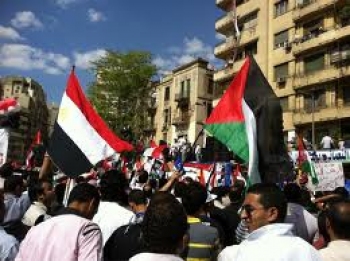 Why write about an Egyptian composer who died in 1923? The answer is the very same reason that this issue of the Journal of Palestinian Refugee Studies is focusing on what the Arab world has been witnessing of late with respect to Palestine and the Palestinians. You will notice that I do not attach any season, summer, spring or autumn, to the fresh air of awakening across the Arab world.


In the blog[i] I wrote to accompany my January 2012 documentary for BBC Radio 4 on the music of the Egyptian revolution (called ‘Songs for Tahrir’), I noted that it was the collective that has always driven my research into music. This might not come as a surprise to those who have attended my concerts, but since my childhood, music has never simply been a form of entertainment. For some reason, it’s always been associated with a concept, a narrative, or – dare I say – a cause. I never consciously resolved that it should be so, but I have always listened to and practiced music that meant something as well as, and notwithstanding musical ecstasy (be it happy or sad).

I can give no stronger example than a wedding I attended in Galilee aged nine; it changed my perception of music for life. Until then, I was not that keen on Arabic music, which I always associated with long songs comprising melodic modes that my young ears struggled to fathom. But when I saw older Palestinian women sing and dance at a wedding and celebrate an identity with which I was struggling, it all made sense to me, even those tricky Arabic microtones. Now, every time I hear older women sing, be they Palestinian women celebrating a child’s birth or Scottish women doing a tweed waulking song, I think of that seminal moment in my life: a moment where music stood for something both beautiful and worthy.

So, where does Sayyid Darwish (1892 – 1923) come into this? It could be because his music has been part of the Arab collective memory for near on a hundred years. It could be that his short songs, compared to Umm Kulthoum’s protracted improvisations[ii], made it easier for a young bi-lingual and bi-cultural Arab such as me to relate to. My husband says that Darwish invented the pop song before anyone had heard of the pop industry! It could be that many of his songs were written for and about certain groups in Egyptian society, notably the marginalized. And it could also be because his songs were political and not merely artistic.

For many Arab music critics, their views of Sayyid Darwish are affected by the way in which he was seen to be hijacked by the ‘Arab Left’ and turned into an Egyptian version of Victor Jara or Woody Guthrie. This distracted people from Darwish’s musical contributions, which stand in their own right, even had he not sung against British colonial rule in 1919. At the same time, since the days of King Fouad I of Egypt (1868 – 1936), and later his son King Farouk I (1920 – 1965), Darwish’s music was invariably ignored and sidelined, from the King’s palace, to the Institute for Oriental Music in Cairo, to official radio broadcasts, down to the national schools music curricula.

To add insult to injury, the first ‘Cairo Congress for Arabic Music’ which was held in Cairo in 1932, barely acknowledged Sayyid Darwish’s contribution. Many believe that this was on direct orders from King Fouad I, a sore point which lingers to this day with Darwish’s family and fans. That the work of the founder of modern Egyptian music was ignored at such an important conference, attended by world luminaries such as Béla Bartók, truly beggars belief.

In the wake of the “23rd July Revolution” by the Free Officers in 1952, Nasser’s regime advocated agrarian reforms, part of which imaginatively included initiatives to collate, notate and perform Sayyid Darwish’s work as part and parcel of preserving the traditional and classical musical heritage of Egypt.

This, however, is also what fed into the eventual ‘hijacking’ by the Left of Darwish’s music which frustrates musical puritans to this day. Moreover, one of Darwish’s long time librettists and companions, Badi’ Khayri (1893 – 1966), was an active member of the first Egyptian socialist party which was set up in the 1920s. Hence many of Darwish’s fans erroneously assumed that he too was a card-carrying member of the socialist party.

When Egypt signed the Peace Treaty with Israel at Camp David in 1979, the then national anthem, penned by Salah Jahin (1930 – 1986) and set to music by Kamal el-Tawil (1922 – 2003), was seen as unsuitable for a country now at ‘peace’ with its previously warring neighbour. The opening stanza of this militant anthem was Wallāh zamān yā silāḥī (‘O, my weapon, it’s been so long’)! And so, the Jahin-Tawil anthem was jettisoned, and instead of replacing it with a new anthem to reflect post-Camp David Egypt, Sadat’s regime brought back Darwish’s iconic anthem Bilādī, Bilādī, (‘My Homeland, My Homeland’)[iii] in 1980. The Egyptian street accepted this anthem, because of its nationalistic sentiment of loving one’s homeland, and because it was seen to revive the music of the People’s Artist, as Darwish is often described.

However, I believe that for many revolutionaries and activists, this act came to symbolize the neutralization of an anthem that had originally been written as an uncompromising statement against British colonial rule. By adopting it as a result of normalisation, it was seen as an appeasement to Israel, reassuring her that military struggle was no longer on the agenda. I do not know what Sayyid Darwish would have made of this, but one can only guess that he would have treated it with one of his notoriously loud outbursts of anger.

And no Palestinian activist can ignore the ‘anthems of the Palestinian revolution’, a repertoire which was spawned after the launch of the largest faction of the PLO, the Palestinian National Liberation Movement (Fateh) in 1965. Sung mainly by men and performed in militaristic but nostalgic manner, these songs accompanied almost every Palestinian festival I have attended since my childhood. Alongside dabke traditional line dance, women singing, Palestinian embroidery and freshly baked date cakes, the festival sound system would blast out these revolutionary songs. No surprise then that one of the most famous songs of this repertoire was a reworking of Darwish’s Bilādī, Bilādī[iv]. When addressing the homeland in the second stanza of the Palestinian version, the narrator sings ‘Fateh is a revolution against our enemies’; Darwish’s original lyric declaims ‘my love and my heart are yours’! This illustrates how much Egyptian nationalistic fervour against foreign occupation, managed to seep into the repertoire of the Palestinian liberation movement via Sayyid Darwish’s testimonial music.

When asked if Sayyid Darwish was indeed a member of the Egyptian socialist party, librettist Badi Khayri explained that Darwish wasn’t simply musicanti (a corrupted borrowing from Italian). Khayri added his now famous rhetorical riposte “do you think that starting up a political party would happen overnight? No, you first need those committed artists and intellectuals to pave the way on the streets.”

For my part, I interpret Darwish’s music in the same vein: you cannot separate his musical innovations – which stand out in absolute form – from his sense of belonging to the homeland and its tribulations. This is what nurtures me as a Palestinian artist, believing in music for music’s sake, yet asserting the existence of a cultural narrative for the Palestinians (and for that matter, for any other nation striving for independence).

Reem Kelani is a Palestinian musician born in Britain and brought up in Kuwait. She released the album Sprinting Gazelle: Palestinian songs from the Motherland and the Diaspora in 2006 and she is completing a follow up album focused on the music of Sayid Darwish.

Reem Kelani Songs for Tahrir: What makes a composer a legend? And what makes a revolt a revolution? http://www.bbc.co.uk/blogs/radio4/2012/01/songs_for_tahrir_what_makes_a.html