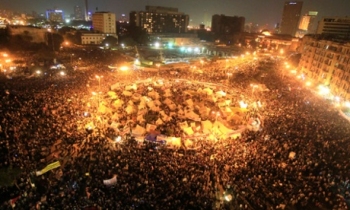 Listening to the commentators, journalists and reviewers giving their retrospectives on 2011, many seemed to put the events in Egypt in early 2011 at the very top of their pick list. For those of us who were fortunate to have been on the ground in Tahrir Square, it was one of life’s great moments. It was, for sure, the Egyptian people’s finest hour.


From my first visit in 1983, I had been struck by the frenetic energy of modern Cairo, a stark contrast to the vast solitude of Egypt’s desert and the silent power of the Nile. I remember being shocked at just how tough life seemed to be for ordinary Egyptians. In the intervening years, as the country’s wealth grew, a few benefitted exponentially, whilst the lot of the masses worsened, as the population multiplied and the institutions of state became ever more self-serving and incapable of addressing the needs of society at large. By early 2011, the extent of that failure was under-appreciated internationally, partly because of the oppressive nature of the regime and partly because many news networks had perhaps been too willing to accept the line proffered by leading Western governments (that the Mubarak government must be fundamentally decent because it maintained a peace agreement with Israel).

Under Mubarak, Egypt became a police state much like the most oppressive states of the old Soviet bloc. It was not just the brutality of the riot police in the street, or even the routine use of torture. Heads of government corporations and institutions, and even ministers, would worry about what the State Security might say about them; one news report in the wake of the Revolution described how the ministry of transport paid the State Security to ensure it got a ‘good’ report. It was State Security which, reportedly, funded and supported Salafi groups as a counter-balance to the Muslim Brotherhood, as was State Security widely rumoured to have been responsible for the bombing of the Two Saints Church in Alexandria on New Year’s Eve 2010 (which killed 23 and badly injured some 125, mostly Christians).

The role of the various security agencies was to protect the regime and its leaders against the people. The inequity in Egyptian society required as much. The other primary source of grievance centred on Israel. There is nothing Islamist in this: most Egyptians feel deeply the injustice suffered by Palestinians because of Israel’s creation, as do most Egyptians object to Israel’s actions, whether it be the invasion of Lebanon in 2006, of the Gaza Strip in 2008, or the moves towards dispossession of Palestinians in the West Bank. There is also the anger of Egyptians towards Israel’s invasions in 1956 and 1967, painful memories of which latter conflict were revived in 2007 with the broadcast on Israeli television of a report that its Army had murdered 250 unarmed Egyptian prisoners of war after they had surrendered in the Sinai Peninsula. The devastating Israeli air raid on Bahr el-Baqar school on 8 April 1970, in which 46 children were killed and over 50 wounded, was another event which still arouses outrage among Egyptians. A re-working of Baligh Hamdy’s song written about this massacre was one of the sounds of the 2011 Revolution.

Egyptians’ exasperation was heightened by the widespread perception that US foreign policy in Egypt was little more than a service to Israel, which was so eager to maintain the façade of the Camp David Accords. Keeping the Accords in place, however, gave Egypt’s State Security yet further cause for suppression. A body of artistic work, encompassing film, music and literature, was but one casualty of the drive to do America’s bidding, as any voices deemed critical of Egypt’s relationship with Israel were silenced.

To the Egyptian people, their interests were being sacrificed at the expense of US and more particularly Israeli foreign policy goals. The Mubarak regime was not merely tolerated, but supported by the US, despite the brutality of its security forces and the failure of its institutions. When Egyptians learned, after Mubarak’s resignation, of the tens of millions of US dollars which the president’s family had been receiving in commissions from the Israeli partner for the import of Egyptian gas, they were left in no doubt that their national interests had long been abandoned by their leaders in the pursuit of personal greed.

Israel was a central part of the narrative of the Revolution from the beginning, and yet many Western news networks seemed to avoid highlighting this. Most correspondents simply reported that the protesters in Tahrir Square were seeking the end of Mubarak and his regime, omitting to mention the demand for a change in policy towards Israel.

One manifestation of the pressure for change came in early March 2011 with the appointment by interim Prime Minister Essam Sharaf of Nabil el-Araby as foreign minister. He quickly announced that Egypt would move to re-open its border with the Gaza Strip at Rafah. As summer 2011 developed, the protesters became emboldened, moving their protest directly to the Israeli embassy in Giza. This outpouring of popular anger towards Israel culminated in the ransacking of the embassy in September and the hasty departure from Egypt of Israeli diplomatic personnel.

If the revolution of January 2011 was emphatically secular, so too was the actual protest outside the Israeli embassy over the summer. Some of those who stood at the forefront and who broke into the embassy were from the core of activists who had been in Tahrir Square months earlier. Indeed, it was the absence of the Muslim Brotherhood and the Salafists from these protests which has fuelled suspicions about secret dealings between them and the Supreme Council of the Armed Forces (SCAF). Moreover, it is these same alliances which seem to be responsible for the apparent reversal of earlier moves to free Egypt from Israel’s embrace.

The fact of Egypt today and of other states in the region is that a more open and democratic process will lead to a more challenging regional environment for Israel. At the same time, it needs to be said that there are few voices advocating a military option. The Egyptian Army certainly appears to see little or no benefit to be gained from any new hostilities.

If the Army’s moral authority has been undermined since early 2011 by its brutal treatment of civilian protesters, it has been further damaged where its actions have been seen to inflict additional humiliation on Palestinians. As the rebellion developed in Libya in March 2011, for instance, thousands of Palestinians fled the fighting and sought refuge at Salloum on the border with Egypt. Whilst other refugees were allowed passage, most Palestinians were denied entry into Egypt and were held for weeks in internment camps, before they could be transferred under escort by the Army to the Gaza Strip. Similarly, hundreds who had caught flights out of Libya were detained at Cairo airport, before they were eventually dispatched to Gaza. It is hard to imagine a genuinely democratic government in Egypt sanctioning such a policy against Palestinians.

On another front, perhaps the biggest issue facing Egyptian society is the under-representation of women at a political level. If recent governments have been a study in failure, it has been a male failure, and in their insecurity, the existing political leaderships have sought to keep women ever more firmly under heel. Whilst the old regime instituted a quota for women of 64 seats in the national assembly in the 2010 elections, the country’s military rulers quietly abandoned it. There is thus the prospect that there will be very few, if any female representatives in the new assembly. This imbalance is likely to exacerbate the pressures on some religious and ethnic communities, notably the Copts, as well as to contributing to more inward-looking and ultimately regressive policies by Egypt’s Islamist parties.

Christopher Somes-Charlton is an Arabist and a consultant on the Middle East. He began his career in the Foreign Office, moving subsequently to the Overseas Development Administration (predecessor to the Department for International Development). Later, he became a fund manager at the United Bank of Kuwait, responsible for funds invested in companies across the Arab world. From there he moved to become Barclays Global Investors’ Director of Business Development, Middle East. More recently, he established The Miktab Limited, an independent company which is responsible for the business aspects of the Palestinian artist Reem Kelani’s activities.