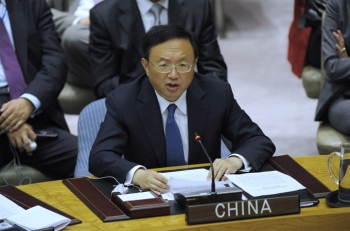 China’s rise and the implications it has on the global order have been topics of considerable academic and political discussion. As China continues to solidify its position as a key international player, it has growing power to alter the outcome of world politics. China’s rhetoric against “hegemonism” and the US dominated world order presents a challenge to the current world system. These realities cause us to consider how China might use its power in order to alter world politics.


One related question is: how might China’s policy on specific international issues, especially policy which noticeably in opposition to the United States’, alter the resolution of these issues? One region where Chinese perceptions of the current world order have the potential to make an impact is the Middle East. China’s popularity in the Middle East is growing, and largely due to its position on issues critical to Arab states. A matter where China’s policy is especially favoured is the Israel-Palestine conflict, where China has consistently vocalised support for Palestine. It was only in 1992 that China established diplomatic relations with Israel. Since then, Sino-Israeli ties have strengthened. Despite the improving Sino-Israeli relationship, China has maintained its support for Palestine, its criticism of Israel, and, by extension, its opposition to the United States’ policy on the issue. We can address the issue of how China will change the dynamics of international relations by asking whether China might have a positive impact for the Palestinians.

China’s support for Palestine is especially evident in the United Nations. This support has caused some optimism among Palestine’s supporters who believe that China’s permanent member status in the UN Security Council will allow it to challenge the United States’ Israel-Palestine policy. On issues where the United States has allowed Israel to flagrantly violate international law, China firmly criticises Israel. For example, ahead of a February 2011 UN Security Council vote on a resolution condemning Israeli settlements, China’s UN Ambassador Li Baodong stated: “China resolutely opposes the construction of settlements by Israel in the occupied Palestinian territory and supports the legitimate demands of the Palestinian people.”(1)[1] Another example is China’s reaction to the 2010 Israeli attack on the Turkish flotilla carrying humanitarian goods to Gaza. China strongly condemned the raid, and foreign ministry Ma Zhaoxu urged a “quick response” from the UN Security Council. Another Chinese diplomat, Yang Tao, stated that “Beijing was prepared to back quick [Security Council] action on the raid, and urged that Israel’s blockade on Gaza be lifted.”(2)[2] Such statements explain why China’s popularity in the Middle East has been on the rise, and explain why Middle Eastern states hope China can use its Security Council status in order to challenge American and Israeli dominance in the region.(3)[3]

China’s support for Palestine is almost exclusively rhetorical; nonetheless China’s recognition of Palestine’s claims is more extensive than most of the world’s leading states. China informally recognises the “State of Palestine”, instead of the “Palestinian Territories” and furthermore recognises the Hamas government as not only the legitimately elected Palestinian government, but also as one which must be directly and fairly dealt with in order to negotiate a solution. Further affirming this policy, in a July 2011 meeting with a Palestinian delegation Chinese Minister of Foreign Affairs Yang Jiechi emphasised China’s support for the Palestinian people’s rights and for their bid for UN membership. Yang said: “China is ready to continue coordination with the Palestinians on all fronts in order to gather support for the Palestinian effort,” he further stressed the “right of the Palestinians to end occupation as soon as possible, establish their independent state and achieve peace in the region.”(4)[4] This statement illustrates that China’s rhetoric is aligned with international law, identifying Israel’s actions as an “occupation” of Palestine, but at the same time careful to emphasise a peaceful approach from both sides.

However, this rhetorical support does not consistently manifest itself into practiced policy. For example, in a 2009 vote to approve the Goldstone Report, which was highly critical of Israeli actions during the 2008-2009 Operation Cast Lead, China voted negatively. Also, regardless of China’s critical rhetoric toward Israel, Sino-Israeli relations have improved vastly since 1992. Chinese trade with Israel increases annually.(5)[5] While this trade is in diverse sectors, one analyst suggested that: “China’s quest for advanced technology, especially defense-related technology and weapons systems, and Israel’s aggressive export efforts in these sectors, underlie Sino-Israeli economic relations.”(6)[6] In fact, Israel has reportedly sold weapons to China on several occasions, causing some strain in US-Israeli relations. China has also sought increased military cooperation with Israel. In an August 2011 visit to Israel, Chen Bingde, Chief of the General Staff of the People’s Liberation Army made a goodwill visit to Israel to “exchange views with the governmental and military leadership on issues such as bilateral military ties, and [the] international and regional security situation.”(7)[7] In his meeting with Israel’s Defence Minister Ehud Barak, Bingde said that “a deepening Sino-Israeli cooperation is contributing to regional peace and stability”, he furthermore stressed the positive developments in recent years between the Chinese and Israeli armies.(8)[8] Given China’s growing relationship with Israel, it must be called into question whether China’s rhetoric in favour of Palestine will cause a tangible change in favour of Palestine in the resolution of the Israel-Palestine conflict. In order to make this projection, it is necessary to understand precisely what concerns drive China’s policy.

In 1987, a Chinese foreign ministry spokesperson stated that China’s policy on Israel was reflective of China’s support for the “just struggle by the Arab and Palestinian peoples against the aggressive and expansionist policy of the Israeli regime.”(9)[9] While this is partially true, a driving reason behind this policy was concern caused due to the United States and the Soviet Union.(10)[10] China’s current policy on the Israel-Palestine conflict continues to relate to China’s attitude towards the United States’ “hegemonism”. This policy position is consistent with the idea that China’s foreign policy reflects a goal of creating a fairer world order. However, to think that China’s policy on the Israel-Palestine conflict is reflective of such a foreign policy vision is limiting. It is perhaps most instructive to think of China’s policy in relation to the Israel-Palestine conflict as a part of a larger Middle East strategy which is not necessarily coherent but is highly reflective of China’s most urgent foreign policy goals. China’s Middle East policy is highly complex, and in many ways it can be contradictory. One only needs to consider the paradox that while China has a growing relationship with Israel it also maintains a friendly relationship with Iran. One of the most pressing domestic issues for China is its energy security. Since China’s 1993 switch to net oil importer status, the Middle East has become a crucial part of China’s energy security strategy. China would rather not procure the majority of its energy resources from the Middle East, but for the near future this is unavoidable. So, China’s support of Palestine and the popularity of this policy among Arabs can assist China in its efforts not only to procure but also to secure its energy supply. However, this “energy diplomacy” only helps explain China’s position on Palestine. China also needs to guarantee its own national security. Modernising and expanding its military capabilities is crucial, and this is where building a relationship with Israel is equally important. Therefore, China is forced carefully balance its policy in the Middle East in order to serve its most vital interests.

So, how should we expect China’s policy on Palestine to look in the future? Even if China’s support for Palestine was driven by nothing other than the goal of creating a fairer world system, it is unlikely that China will be able to counter US policy over the Israel-Palestine issue in the future. The United States’ status as a permanent member of the UN Security Council means that even though China has a growing influence within the organisation, it cannot prevent a US veto. Furthermore, China infrequently comments on the “internal affairs” of other countries. This policy is not only true when such criticisms contradict China’s national security goals, but also when the same criticism being applied to one country can also be applied to China. The Israel-Palestine conflict is not far different from China and Taiwan, Tibet or Xinjiang. Given that the Chinese Communist Party closely links its legitimacy to these issues, it is hard to imagine China setting a precedent which can be used against it in the future. This alone makes it difficult to envision Chinese rhetoric in favour of Palestine becoming a consistently practiced policy. The Chinese decision to vote against approving the 2009 Goldstone report is just one example. The bottom line is that China can and will push Israel and the US, but only to the extent that it is willing to be pushed regarding its own human rights questions and territorial disputes.

Regardless, it is possible that as China’s role in world politics grows some changes may occur in the way the Israel-Palestine issue is addressed. This may have a favourable impact on the Palestinian refugee situation. In order to achieve its broader Middle East goals, a more powerful China could push for an immediate settlement of the Palestinian refugee problem, separate from a peace agreement. Israel insists that the issue of Palestinian refugees can only be solved as part of a peace agreement. However, China can use its economic relationship with Israel as a bargaining chip to insist on the resolution of the issue in the general UN forum. This would favour both China’s interests with Arab countries and with Israel. However, this is pure speculation, and it is difficult to predict how China’s Middle East policy will evolve. Much will of course depend on whether the Palestinians themselves can first move refugees and the other crucial “final status issues” up the agenda. In the meantime, there is reason to be cautiously optimistic that China may modestly help improve the situation for Palestinians, but a strong stance from China that would dramatically change the existing US dominated situation is harder to imagine.

Samantha Hoffman is a China specialist. She graduated from the University of Oxford with an MSc in Modern China Studies in 2011. She is currently an Armed Forces intern for the Asia-Pacific region at IHS Jane’s.

Shichor, Yitzhak. "Competence and Incompetence: The Political Economy of China's Relations with the Middle East." Asian Perspective 30, no. 4 (2006): 39-67.

[2] 2- Global Outrage Over Israeli Attack: Reaction from around the world to Israel's attack on Gaza flotilla." Al Jazeera. June 3, 2010.