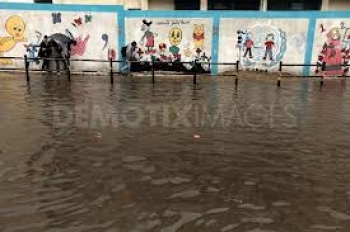 As rain stops and clouds dissipate, Um Ahmad hurried to prepare her four children to go to school. After saying them good-by, she vented a sigh of relief and went on with her morning house chores. Few minutes later, she heard insisting knocks on the door, she opened it only to find her children standing before her dipped in mire and their clothes wet right to the innermost layer.


With sad eyes Um Ahmad said, "In rainy days there would be no schools and no universities, water covers everything and sometimes gets into our houses. And if ever our children ventured to leave the house and go to school, they return home five minutes later with their clothes wet and splattered with mud." While she was changing her children's clothes rapidly so that they don't get cold she continued, "I won't send them to school so long as there is rain, I don't want anything bad to happen to them or they drop into any of the many rain water pools in the [refugee] camp". In agony she added, "Our life here in the refugee camp is terrible, no well-paved streets or adequate sewage system. Even our houses are unfit for human beings to live in. But what we can do?! We are still patient and endure our life Allah ordained for us".

Heavy rain and gusty winds on Gaza since the beginning of winter exposed many of the refugee camps' defects which summer had previously concealed. Gaza didn't know that the coming of winter will reopen its winds, and that high winds will uproot the quasi-houses common in the refugee camps. This is not to mention the unpaved streets, and the poor sewage system that are incapable of enduring the continuous rain.

The refugee camp is gone

University student Firas Salama, a resident of Shati refugee camp, struggles every morning to leave his home and go to the university, but once he leaves, he returns home, despondent, with his arms weighed down after his many attempts to cross the street covered with water.

While rubbing his wet clothes, he said angrily," how long will we remain under these conditions? Everybody in the world gets jubilant with the falling of rain in winter and we in the refugee camps hate it and hope it will never come because our streets and houses would drown in water". He continued, "Our life here in the refugee camp is so simple and our houses are crudely built; any strong wind will uproot the [asbestos or tan leather] roofs that shelter us. We live in situations which are dire, difficult, and cruel, which no human being should endure. Above all, we suffer from the [Israeli] siege that has made many youth stay at home without work."

On the reason of this suffering by which the camp is afflicted every winter he said, "The reason is the non-rehabilitation of infrastructure to make it adequate to endure the flowing rain water that invaded the streets and narrow the lanes of the camp. The roads are not properly paved, which made the problem worse; and houses are so dangerously close to each other that one cannot tell them from each other."

While trying to fix again the tan sheets which had flown away from the roof of his dilapidated house due to the ruthless winds and heavy rains Abu Khlid said, "here in Jabalia refugee camp the situation is disastrous and intolerable; we have become fearful of winter, because it doesn't leave us and inflicts us with sickness and afflicts our children. The continuous rain drowns all of our house furniture". With a somber face he went on, "in winter the real face of our poverty and calamity unveils; our houses that shelter us are unfit for humans to live in. Every night our children shiver from cold and we sink in water". He added painfully, "I have nothing to give for my kids who are in pain from the stings of cold and catch many illnesses. My work is barely sufficient to feed them and I can't purchase a new house or even improve one room to make it fit for human habitation".

His wife picks up the subject matter of our dialogue and says while rubbing her palms to generate warmth, "all what we dream of is a house far from the camp lanes and the smell of moisture and rottenness, far from insects and sickness in summer and the rain that wets our furniture in winter".

Poor families who reside in the refugee camps in the Gaza Strip feel despair and anguish when rain water flows like a bolt from the blue into their houses and wreaks havoc through their tiny spaces and leave them suffering cold and sickness".

His neighbor Abu Ibrahim Hamid, a father to eight children and unemployed for six years, lives with his children in two derelict rooms that barely shelter them. Every rain season he covers the windows with nylon and sheets of cloth so that his family wouldn't drown under rain water at night while they are asleep. He says bitterly, "I've no money to refit the two rooms and stop water's leaking into our house every year. I am barely able to feed eight hungry mouths and satisfy their needs for food and clothing. We depend on the UNRWA's aids which don't satisfy the minimum portion of our needs."

In a windy night neighbors were awakened by Abu Al-Walid yelling for help: rain water gathered inside his three-room tan-roofed house, and his children were about to drown. Recollecting that dreadful night Abu Al-Walid said, "If it had happened that my neighbors delayed for minutes, I would have lost two of my children after flood water broke into my house while we were in deep sleep. The level of our house's terrain is low and the sewage was over-filled, that's why water got into our house."

Jabalia refugee camp, north of the Gaza Strip, is counted as one of the largest among the eight refugee camps in the Strip with a space of 1.4 square kilometers and a population of 104,000 registered refugees who suffer the scourges of poverty.