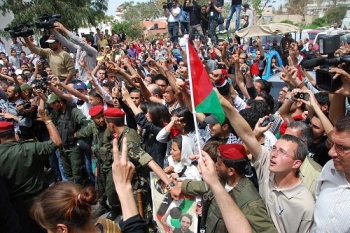 Popular resistance is entering into the Palestinian milieu, particularly during the current stride towards Palestinian reconciliation. As a concept, popular resistance has achieved moral authority by the precedent set by Gandhi's civil and peaceful resistance to the British Crown in India and the African National Congress (ANC) defiant stand against Apartheid in South Africa. The proposed question here: does the promotion of peaceful resistance come within the context of a Palestinian strategy, or is the adoption of it merely tactical move designed to compel the Israeli occupation to freeze settlement and, hence, resume the serial of absurd negotiations?


In both cases, the issue is in need of discussion. If what the Ramallah Authority (PA) proposes an adoption of popular resistance as a strategy, which is very unlikely, then the cheerleaders of popular resistance in Palestine need to give an explanation to the their own statements and practices on the ground. Above all, this tendency needs an unequivocal Palestinian political stance, not just an expression by random participants and prominent names in marches and meetings here and there.

We are not here in the task of checking the suitability of words to deeds, or whether the Palestinian Authority's experience shows its adherence to this principle or not, or the fact that it called for it only at critical moments like the Israeli war on Gaza for example. But it is sufficient for us here to remind everyone that the holding of this banner of poplar resistance entails bringing the Palestinian people into the center of the action. Needless to say it requires such a move to unite the experiences of the Palestinian people in their confrontation of the numerous forms of Israeli aggression.

But if the proposition is tactical, it would be imperative here to highlight that despite the fact that popular resistance is an important device to galvanize people into resisting Israeli occupation, than limiting this goal to this method only is a clear demonstration of a defect in our understanding of the conflict imposed on the Palestinian people.

The military colonial template manifested through Zionism differs from the Indian-British model. "Israel" is not equivalent to the "East India Company" which Gandhi was able to put pressure on through local markets and resources and further pressure it to leave. This stance was assisted all along by the consumption and production by the people itself involved in civil disobedience. Similar levers was employed in the Palestinian case during certain stages of the conflict, but insisting on them as the only option cannot formulate a coherent strategy of resistance that is able to respond to the many different fronts in the Israeli occupation of Palestine.

There is a hidden flaw in the current discussions on popular: there is a party which believes in two contradictory things: they combine popular resistance while at the same time cooperating with occupation that has been ongoing for decades. It is totally bizarre and morally inconsistent for those who suppress protests against occupation while holding the slogan of popular resistance.

It is clear that some voices are seeking to champion the term but not escalate mass activism against the occupation, and even to displace the concept of comprehensive resistance out of the scene. According to this perspective, people are expected to demonstrate in silence holding candles and moving soberly around and to go home afterwards, without wielding any real pressure against the face of aggressions on a daily basis on people, land, sacred places, households and resources. The Palestinian people, according to this strategy, are supposed to expose reality of occupation in its abstract form. It is not acceptable to demand of the Palestinian people adherence to a single form of resistance and take away all other cards without any tangible return. It is better to say that people's, or popular, resistance means only the beginning of all other resistance options.