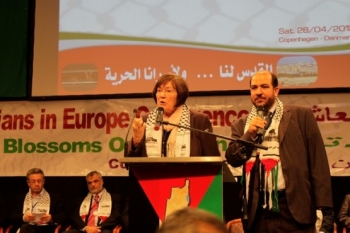 The 10th Palestinians in Europe Conference

Reaffirming the right of return and launching Palestinian prisoners campaign


The annual conference of Palestinians in Europe is an important initiative determined in empowering Palestinians to reach their utmost goals of freedom and self-determination. It is a major event amongst Palestinians in diaspora, drawing crowds of up to ten thousand every year in May. Since its launch in 2002, the conference has continually reaffirmed the Palestinians unwavering desire to return to their land and launched numerous campaigns to address ongoing injustices against Palestinians.

The Palestinian Return centre (PRC), based in London, initiated this very important project. It has been on the agenda of the PRC since it took the position of the Secretariat of Palestinians in Europe. These conferences provided a central meeting point, every year, between delegations from all across Europe, representatives of parties and NGOs, and representatives from the occupied lands.

The Right of Return for Palestinians in the Diaspora is a key aspect of the Arab – Zionist conflict.  The projects of resettlements of refugees in the Arab world and elsewhere undermine their human right. These attempts are misguided as they free Israel from their legal and ethical obligations towards the plight of Palestinian refugees.

A key objective of the conference is to ensure that Palestinian refugees have their chance to express their honest views regarding ongoing political attempts to impose a political solution that bypasses their human rights. The conference aims to silence those trying to relinquish human rights and turn rights into a political bartering process.

The initiative was originally called for by PRC in London. The first conference, drawing up to ten thousand people, was held in London. It was the first of a series that followed in a number of European countries coordinated by local Palestinian refugee communities. Within the second conference in Vienna, the General Secretariat of Palestinians in Europe Conference was formed to supervise the organization and the preparations for future conferences.

These conferences have become a bridge for communications and interaction leading to theoretical and practical decisions and steps. Many documents and charters are issued via these conferences carrying the wishes of Palestinians living in Europe. It also expresses their views regarding the Palestinian cause and the Palestinian territories, especially when it comes to the right of return.

Other major achievements of the conference include:

The 10th Palestinians in Europe Conference was held in Denmark, Copenhagen on Saturday, 28th, April 2012 under the title “Our Spring blossoms our Return”. The Tunisian President, Mohammed Monsif al Marzouqi, delivered a televised speech where he supported the struggle of the Palestinian people and the right of refugees to return to their homes and villages in the occupied historical Palestine.

The conference discussed key issues like the Palestinian Refugees in Iraq and Nahr al Bard Refugee camp crisis, where calls have been made on the Lebanese government to improve the refugees living conditions.

Former British Minster and MP, Clare Short expressed her joy in speaking on behalf of thousands of Palestinian Refugees. She spoke of her support in offering the Palestinian Refugees their full rights especially the right of Return. She also held Israel responsible for the failure of any peace talks in the Middle East due to its expansionist polices.

From the occupied Palestine, Dr. Mustafa Al Barghuti, a Parliamentarian and President of Palestinian Initiative, attended the event where he described the apartheid practices of Israel in the West Bank and Jerusalem. Al Barghuti, emphasized popular resistance as a necessity in supporting all other legal methods of resistance in fighting Israeli occupation.

Palestinian Parliamentarian and Head of Popular Committee against the Siege on Gaza, Jamal Al Kohdary, delivered a speech where he called on an immediate action to lift the siege on Gaza and unity of Palestinian movements in a step to challenge Israeli occupation. Other key speakers included Dr. Muhammad Yasir Amro, Chair of Academy of Palestinian Refugee Studies and also, Basim Kayed, chair of Palestinian Scholars league in Lebanon.

The conference launched a campaign titled, “European Campaign to Release Palestinian prisoners” where a number of organizations have agreed to unite efforts to create pressure on the European Union and its officials. This campaign is the major outcome of this year’s conference.   Palestinians in Europe united in solidarity with Palestinian Prisoners in Israeli jails.

The conference recognised that the plight of Palestinian and Arab prisoners in Israeli occupation jails is passing through a critical moment that requires immediate European and International intervention as thousands incarcerated begin hunger strikes.

Thousands of Palestinian and Arab prisoners are deprived of their basic rights while incarcerated in Israeli prisons which are lacking in basic standards required in any jail. They have endured many unjust practises inflicted by the Israeli government which is violating its own commitment to International law and the Charters of Human Rights. These violations are committed with total impunity and International accountability.

The Israeli violations of human rights of prisoners include:

Methods of torture and use of psychological terror and techniques for degradation of human dignity as well as practices of blackmail against prisoners. Prison authorities use torture to obtain confessions which are then presented during unfair trials. Prisoner’s families are deprived from visiting their relatives beyond acceptable period. This is unfair and a collective punishment policy against prisoners. Some prisoners were prevented from seeing their families for 10 years and many others it was 7 years. Administrative Detention: Israeli authorities imprison Palestinians indefinitely without trials, some for many years. Solitary Confinement: Many prisoners are detained in very small cells removed from any interaction for long periods of time, even years. Medical Negligence: Prisoners are deprived basic medical care resulting in critical and chronic diseases that risk their lives. This includes prisoners who already suffer from chronic diseases. Military Trials and Detention: A collective punishment policy of detention is practised against civil society, students and activists for organising non-violent protest in their communities in support of Palestinian rights. Members of Parliament were not immune to such draconian methods.

Thousands of prisoners were exposed to the above inhumane practises regardless of their genders or ages. Mothers were jailed with their children, youth, university students, elderly people, minors, Parliamentarians, political leaders and even patients. The conditions listed above have driven thousands of prisoners to go on hunger strike to end the Israeli violations and draw the attention of the International community to their cause. It’s also hoped that the hunger strike will break the silence of the International community. They started their hunger strike despite the terrible health risks associated with such a desperate tactic.

All the organisations signed a petition dispatched all over Europe announcing their solidarity with the Palestinian prisoners in Israeli jails. They called for the following:

International community, European Union state members should work towards ending the plight of thousands of Palestinian prisoners whose rights are continually violated. Launching wide-scale solidarity and awareness event in support of Palestinian prisoners across Europe until they are addressed. Initiating European investigation committee that is mandated to visit and inspect the conditions facing prisoners in Israeli jails and ensure appropriate intervention is made by the different EU commissions. Enabling the International Red Cross and the various Human Rights organizations to look into the conditions of prisoners immediately. Compelling Israeli authorities to stop its arbitrary detention policy practised daily against Palestinian civilians. And also to stop the policy of torture and collective punishment policies and allowing them to see their families. Imposing punitive procedures and actions against Israel if it doesn’t abide by International laws and Human Rights Charters.