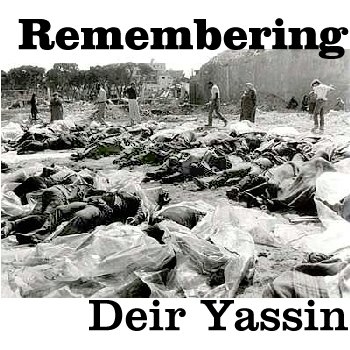 Share on Facebook Share on Twitter
Early on the morning of Friday April 9th 1948, the peaceful Arab village of DeirYassin was attacked by members of the Zionist Irgun and the Stern Gang. More than 100 men, women and children were massacredand many others were wounded. The remaining population of the village had to flee.


Not the only massacre of the time or even the worst, DeirYassin, more than any other single event, signalled the forced flight of the Palestinian population which led to their eventual dispossession and exile – and to the creation of the state of Israel.

65 years after this catastrophe, we are set to commemorate the DeirYassin massacre. A number of events will take place nationwide, many with the participation of Abdallah M. I. Eid, a DeirYassinsurvivor who will be coming to the UK from Palestine for 2 weeks, April 4th – April 18th 2013. Mr Eid was four years old at the time and lost his father and brothers in the massacre.

On Tuesday April 9th (DeirYassin Day) a key event will take place at the St John’s Wood Church in London. This central, prestigious and very beautiful church,has long been a friend of DeirYassin remembrance and has already mounted three commemorations in 2002, 2005 and 2007. The commemoration, hosted by the church for the Palestinian people and open to the public, is being directed by Justin Butcher (The Madness of George Dubya, Scaramouche Jones)

Just afew hundred metres down the road from the church is the Central London Mosque,where there will also be a commemoration.

Scotland’s commemoration will take place at the DeirYassin memorial in Kelvingrove Park, Glasgow on Sunday, April 7th,the 25th anniversary of the consecration of that memorial.

There will be a meeting at the Houses of Parliament where Mr. Eid will tell his story for MPs and the general public..

A Commemorative tour will also visit Wigan, York Minster, Brighton, Leicester, Exeter and Manchester. Many of these commemorations will be held by ordinary people coming together in spaces private and public to remember DeirYassin

These commemorative events are organised jointly by DeirYassinRemembered, the Palestinian Return Centre (PRC) and others.

For a rolling bulletin of information about these and further events visit: