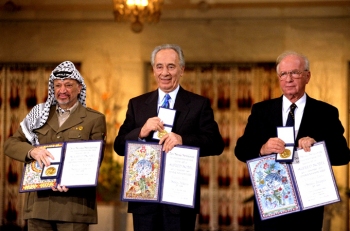 Share on Facebook Share on Twitter
The Palestinian Return Centre (PRC) will be hosting a two-day conference to mark the 20th anniversary of the Oslo agreement. The centre announced the conference early in January 2013, since then, preparations are taking place to organise this condensed and significant think-thank conference.
The conference will review its impact on core Palestinian issues particularly the refugees, and its future as a framework for resolving the conflict. The agreement between Yasser Arafat and Yitzhak Rabin in 1993 set the principals and Interim Self- Government Arrangement for Palestine. The two day conference will explore in detail the structural problems within the Oslo agreement, its impact and future on Palestine. A number of scholars, experts, academics and MPs will participate at the event where academic papers will be delivered and political debate will be created. According to PRC speakers and lecturers include, ·         Dr. Osama Abu Irshaid, Political commentator  from Washington D.C, US, ·          Professor Ilan Pappé - Arab and Islamic Studies - University of Exeter, Author of the The Ethnic Cleansing of Palestine ·         Rawan Al Damen Producer and Director, Programs Department Al Jazeera, Director of Al Nakba film series, Qatar ·         Dr Uri Davis, FATH Revolutionary Council & Palestine National Council, ethnically cleansed and occupies Palestine. ·         Director of Al Jazeera Centre for Studies, Salah Eldin Elzein, Qatar Several others international speakers and lecturers will be confirmed later on. According to PRC Conference coordinator, Nasim Ahmed, Topics of the conference will include refugees, Jerusalem, borders, settlements - as well as other related issues; water, Palestinian Authority, security. A number of sessions will also analyze the historical road to the Oslo agreement and its future. The conference will be held in London from Saturday the 7th of September to Sunday the 8th of September 2013. To book your seat contact us on: events@prc.org.uk or call 02084530919
Short Link : http://bit.ly/2A65tPg
Tags
Next Article
Watch "The Agony" Film: Remembering Deir Yassin Massacre
Previous Article
Urgent Petition to European Union: Save Palestinian Prisoners’ lives
Most Views
Related Posts