The Final Statement of the 11th Palestinians in Europe Conference – Brussels 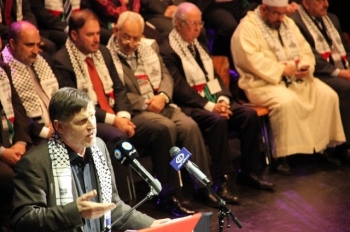 Share on Facebook Share on Twitter
The 11th Palestinians in Europe Conference ended in Brussels, on Saturday, 18th May 2013. The conference was convened under the title, “Signs of Return is blossoming”. Thousands of Palestinians participated in the annual event, which was attended by delegations from various European countries.  A number of Palestinian politicians, community leaders and public figures participated in the event.  They came from locations either in the occupied Palestinian territories or the Diaspora. European MPs, activists, journalists and representatives of various NGOs also took part in this year’s event.
The conference was organized by the General Secretariat of the Palestinians in Europe Conference, the Palestinian Return Centre (PRC), and the Palestinian Assembly in Germany.The conference reaffirmed declarations from the previous years: London 2003, Berlin 2004, Vienna 2005, Malmo 2006, Rotterdam 2007, Copenhagen 2008, Milan 2009, Berlin 2010, Wuppertal 2011 and Copenhagen 2012, and added new ones.After a day of engaging discussion, workshops, lectures and debates, the conference concluded the following:1-    We reaffirm our adherence to the Right of Return for Palestinian Refugees. This right is inalienable and non-negotiable. It can’t be vetoed, circumvented, supplanted or altered.  The Right of Return is a collective and individual right that is irrevocable. Our people will continue their struggle until it is achieved.  2-    We are proud of the struggle and resilience of the Palestinian people who continue to make great sacrifices, 65 years after the Nakba, against occupation and oppression for their dignity freedom and self-determination.3- We express our deep concern over the Israeli aggressions on Jerusalem and its indigenous Palestinian residents, especially in the light of growing deportation. We warn against the systematic discrimination against Jerusalemites which sees them besieging in their residential areas by settlements and the apartheid wall.   We also warn against the assault on historical Muslim and Christian sites in Jerusalem. 4- We are proud of the sacrifice and determination shown by Palestinian prisoners in Israeli jails, especially their bravery against unjust Israeli policies. The issue of Palestinian prisoners is one of our main priorities and we ask the international community to demand an end to their mistreatment. 5- The conference affirmed the need to intensify efforts to face the systematic expulsion of Palestinians in the West Banka and occupied Palestine in 1948 territories. The policy of apartheid, segregation, annexation of land trough the illegal wall and settlements should come to an end so people can live freely. 6- The conference salutes the steadfastness of the people of Gaza. Despite Israeli aggression and a long siege they remain strong. We vow to continue exposing Israel and its crimes against the people of Gaza.7- We condemn the call for land swap between the state of Palestine and the Israeli regime. We warn that such a step will jeopardize Palestinian rights and legitimatize Israeli occupation.  It also endangers the rights of Palestinians inside occupied lands of 1948.  We totally reject such plans and reaffirm our inalienable and legitimate rights. 8- We declare our solidarity with the Syrian people in their plight. We are extremely fearful of their future and very concerned over the growing humanitarian crisis where thousands have died and millions have been displaced.  We also call on all sides in Syria to refrain from dragging the Palestinian refugee into their internal differences. The camps should always remain neutral. Humanitarian aid should be offered to Palestinian and Syrian refugees freely without any restriction. 9- In light of the dreadful conditions that Palestinian refugees experience in Arab countries, including those fleeing Iraq and Syria; we call on all Arab countries to treat Palestinian refugees justly and fairly. We invite the Arab League to investigate the extent of Arab countries’ commitment to the Casablanca Protocols of 1965 concerning the treatment of Palestinian refugees. This should be in accordance with their right of return to occupied Palestine. 10- We stress the importance of achieving National Palestinian Unity Agreement between all Palestinian parties. This should include reforming the Palestinian Liberation Organization (PLO). This is an indispensable building block within the internal Palestinian community. This unity would ultimately help to protect our national rights. Such measures will unite the Palestinian people and enable them to face Israeli occupation.  Additionally, we call for democratic representation of the Palestinians in Europe. The conference also calls on Palestinian parties to enforce the civil NGO work wherever the Palestinian people exist.  In this regard, we call on Europe and the International community to respect the democratic choices made by the Palestinian people. 11: The conference stresses historical responsibility of Europe for the Palestinian Nakba and displacement of 1948. Generations of Palestinian people are still paying the price of Europe’s mistake and still Europe continues to assist in the expansion of the state of Israel and its illegal policies.  We announce our full support for the International Campaign demanding an apology from Britain for the Balfour declaration which marks the beginning of Palestinian suffering.12- We commend all efforts by everyone helping the Palestinians in challenging and confronting Israeli wars, siege and illegal practices. We urge everyone to remain steadfast and develop these efforts that support the Palestinian people for their fight against occupation and injustice towards freedom, justice, human rights and a democratic Palestine.
Short Link : http://bit.ly/2Cbovov
Tags
Next Article
PRC & Exeter Institute of Arab Islamic Studies hold Int. Conference: Oslo, 20 Years of Negotiations
Previous Article
World Refugee Week: Public Briefing at the Houses of Parliament
Most Views
Related Posts