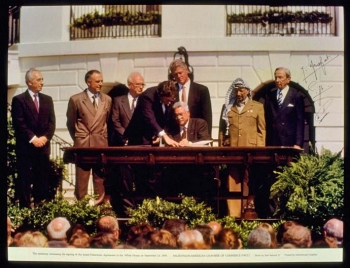 The Palestinian Return Centre (PRC) and Exeter Institute of Arab Islamic Studies (IAIS) are organizing a two-day international conference to mark the 20th anniversary of the Oslo Agreement. The agreement between Yasser Arafat and Yitzhak Rabin in 1993 set the principals and Interim Self- Governing Arrangements for Palestine, which has presided over the region for two decades without achieving a final resolution.


The conference will review the Impact of Oslo on core issues such as the refugees, and its future as a framework for resolving the Arab Israeli Conflict. The two day conference will explore in detail the structural problems within the Oslo agreement, its impact and future on Palestine. A number of scholars, experts, academics and MPs will participate at the event where academic papers will also be delivered addressing every aspect of the agreement. Confirmed speakers are:

Several more speakers will be confirmed over the coming weeks. According to PRC Conference coordinator, Nasim Ahmed, Topics of the conference will include refugees, Jerusalem, borders, settlements - as well as other related issues; water, Palestinian Authority, security. A number of sessions will also analyze the historical road to the Oslo agreement and its future. The conference will be held in London from Saturday the 7th of September to Sunday the 8th of September 2013.