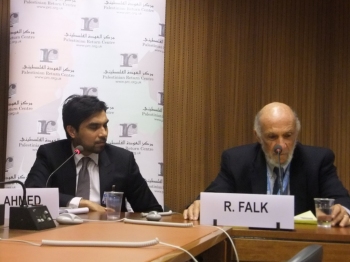 The Palestinian Return Centre 9PRC) took part in the 23rd session of the Human Rights Council in Geneva.

The UN special Rapporteur on Palestine, Professor Richard Falk, was joined on the panel by PRCs own representative, Mr. Nasim Ahmed and the activist, Issa Amro, from the West Bank.

Mr. Amro, the first to speak, described in detail the ongoing ethnic cleansing in Hebron.

His visual presentation showed the daily violence perpetrated by Israeli settlers against Palestinian residents. Mr. Amro’s organization, Youth Against Settlements, are on the front line of peaceful protest, he said. They experience the full force of Israeli soldiers and armed settlers in their protest against land grab, material destruction, open segregation and racism.

Mr. Amro showed footages of Israeli soldiers abusing and humiliating Palestinians in Hebron. Children as young as 10 were arrested and abused he said. Soldiers also took no action when settlers physically attacked Palestinians and instead, they operated together, soldiers and settlers, in the slow ethnic cleansing of Hebron.

Mr. Ahmed, senior researcher of the PRC, commented on the plight of Palestinian Refugees fleeing Syria. He described how Palestinians live in a perpetual state of violence and insecurity. Palestinians in the West Bank who endure humiliation, abuse and violence are united with Palestinians in Syria and around the world in grief.

Mr. Ahmed’s presentation focused on the consequences of statelessness, the absence of a fully functioning refugee protection regime for Palestinians and the political failures which continues to blight Palestinian lives all over the world.

In addition to highlighting the humanitarian crises, the discrimination Palestinians face after fleeing Syria, the need to repel any attempts to defund UNRWA, he explained that the regime which continues to terrorize Palestinians in Hebron is the same regime that's blocking the return of Palestinian refugees. “If the great powers had insisted on Israel repatriating the refugees in 1948 as was demanded under international law then:  the refugees would not exist, the Middle East would be free from six decades of displacement of Palestinians and the international community would not need to fund institutions to support them.

Mr. Ahmed lamented the daily persecution in Hebron asserting “if Israel is incapable of living in peace with Palestinians already in Palestine, what hope is there for the millions that wish to return".

He explained how the extreme now exemplifies all aspects of Israeli occupation of Palestine. Summing up the two previous presentations, he said the settler land grab in Hebron and the refusal to address the plight of refugees in a meaningful way are not different in quality. The come from the same taproot which is the desire to colonize and occupy Palestine while denying self determination to the Palestinians.

Essentially the problem isn't just about land but about people. With 7 million refugees hoping to return, the question isn't so much who gets what land but can we live with another people, another human being.

He bemoaned the fact that the media have failed to provide a true picture of the occupation. The so called temporary occupation is now a permanent reality and this fact has been airbrushed by the media. People have to make effort just to learn about the daily humiliation and land grab, it's not news anymore.

The radical denial of Palestinian self determination is another re-emergence of settler colonialism. The post colonial world has found a new way to legitimate colonialism and tolerate this terrible sequence of displacement and denial of human rights.