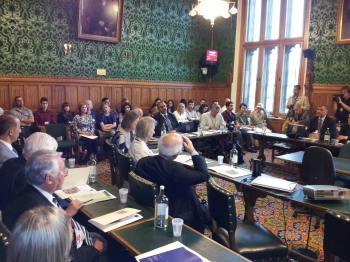 The Palestinian Return Centre (PRC) and the Council for European Palestinian Relations (CEPR), held a public briefing at the Houses of Parliament last Wednesday 19 June 2013.


This event coincided with two global occasions, World Refugee Week and International Refugee Day, which are commemorated annually in June. The centre organized this event to provide an update on major issues effecting Palestinian refugees. A key part of the event was reporting back on the parliamentary delegation to Lebanon organized by PRC and CEPR.

Philip Hollobone Conservative MP for Kettering, who was part of our delegation, chaired the event. He was joined on the panel by other members of the delegation and, Sir Gerald Kaufman, the Palestinian Ambassador, Manuel Hassassian and the Lebanese Ambassador Inaam Osseiran.   A packed audience was made up of the general public which also included twelve members of parliament and the House of Lords.The briefing began with a short ten minute video which is part of a larger documentary produced by the PRC on the delegation to Lebanon. It is a collection of interviews, meetings and visits made during the parliamentary delegation to Lebanon.

Speaking first was Dr Arafat Madi, director of CEPR. His presentation explained the reasons for the delegation to Lebanon and described the humanitarian disaster that is unfolding. Mr. Shoukri also warned of UNRWAs inability to respond to the growing crises, as it was already stretched in meeting the demands of the existing half a million Palestinian refugees in Lebanon.

Baroness Tessa Blackstone then spoke of her experience during the trip to Lebanon. She thanked PRC and CEPR for organizing the delegation and offering a unique opportunity to see firsthand the plight of Palestinian refugees fleeing from Syria into Lebanon. She was horrified at humanitarian tragedy and regretted that the video only showed a small glimpse of the challenges facing Palestinians in Lebanon.Baroness Margaret Jay also confirmed the previous statement and spoke of her depressing experience. They both warned of the dangers created by the growing numbers of Palestinian refugees streaming in from Syria, which numbered fifty thousand and the growing instability that was being created in Lebanon.

Mr Ghasan Four who was also a member of the delegation spoke of the unique vulnerabilities experienced by Palestinians during political instability in the Middle East. He spoke of the disproportionate level of abuse, persecution and discrimination that follows Palestinians because of their statelessness and “refugehood”. He also spoke of the dangers in attempts to defund UNRWA, as is happening in the USA. The cycle of exile and displacement, Mr Four stated, is the result of Israel’s refusal to implement human rights and allow Palestinians to return to their homes.

Palestinian Ambassador to the UK, Professor Manuel Hassassian gave an eloquent appraisal of Israel’s long and unrelenting occupation of Palestine. He warned of the current Israeli policy which has destroyed the two state solution and continues ethnic cleansing. Speaking about his own situation, even as an ambassador, he is unsure if his own residency, in his ancestral home in Jerusalem, will not be revoked by the Israeli authorities. Palestinians are always at the mercy of the Israeli authorities, he said, and the “bantustanization” of Palestine means the only viable option is a secular democratic state in historic Palestine. Sir Gerald Kaufman, Labour MP, eagerly spoke of his participation in previous PRC delegations which he headed. After strong approval of previous presentations, he described the scenes from refugee camps during his previous visit to Lebanon. It was no way for humans to live he said, with threats and dangers lurking around every corner and no hope for the future.

PRC also distributed number key reports during the event, including our in-depth study on the Palestinian Refugees from Syria and the final report of the delegation.

This parliamentary briefing coincides with a much wider initiative by the PRC during International Refugee Day. This year we hosted a seminar at the UN during the Human Rights Council 23rd session where our representative, Nasim Ahmed joined the UN rapporteur Richard Falk on the panel. We also sponsored the Nakba Museum that was launched in Bristol.