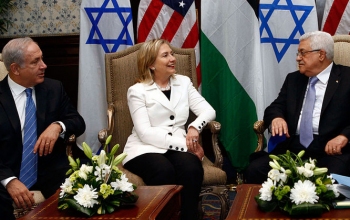 The Palestinian Return Centre (PRC) and Exeter Institute of Arab Islamic Studies (IAIS) are organizing a two-day international conference to mark the 20th anniversary of the Oslo Agreement. The 2-day event will take place in London, on Saturday and Sunday 7-8 September 2013.

A number of politicians, scholars, experts, academics will participate at the event where  all aspects of the agreement will be discussed in detail.

The conference will review the Impact of Oslo on core issues such as the refugees, and its future as a framework for resolving the Arab Israeli Conflict. The two day conference will explore in detail the structural problems within the Oslo agreement, its impact and future on Palestine.

Key session examining the future of Oslo as well as impact on the Palestinian cause in light of Arab spring and other incidents will be included.

PRC previously called for papers for the conference. A number of academics and researchers have already submitted various studies under the suggested titles of the conference. The deadline for papers is the due on 1st of July 2013.