‘Fish out of water’ yet again: Palestinian refugees from Syria in Egypt 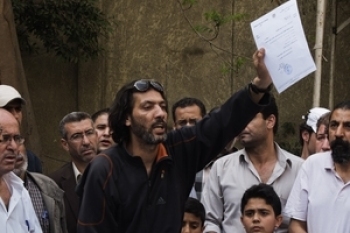 By Neil Sammonds, Amnesty International’s Syria researcher-- Bahaa, a Palestinian refugee from Syria, has taken a short break from his precious decorating job to take me to meet his family in 6th of October City, a satellite city of Egypt’s capital Cairo.

Bahaa’s family shares the flat with another Palestinian refugee family from Syria and Bahaa is the only person with a job. Despite working every day his income doesn’t even cover the rent, and he is forced to work “illegally” since neither Palestinian nor Syrian refugees from Syria have the right to work in Egypt.

Syrian refugees in Egypt have the same access to subsidized primary and emergency health care as the Egyptian population, but for Palestinian refugees from Syria, the situation is different. Statements made by the Palestinian diplomatic mission in Egypt in April this year, following protests outside it by Palestinians who had fled Syria, promised them access to health care through the Union of Egyptian Doctors, apparently including the treatment of all Palestinians from Syria in the hospitals and treatment centres it operates.

But according to Bahaa and other Palestinians from Syria to whom I have recently spoken, this has not translated into practice for most Syrian Palestinians. For example, a few weeks ago Bahaa had a work accident and went to hospital for an X-ray. He could not afford 100 Egyptian pounds (around US$14) to have an X-ray and accordingly he stayed in bed for some days until he felt able to return to work. Khaled, another Palestinian from Syria now living in Egypt, told me that the Union of Egyptian Doctors does not have sufficient resources to cover the needs and the majority of those looking for treatment are unsuccessful.

Bahaa’s Egyptian one-week entry visa expired two months ago. Palestinian refugees from Syria fear seeking visa extensions as they may be denied them and be forced to leave Egypt. Syrian refugees ordinarily receive three- or six-month entry visas on arrival and then may register with UNHCR, the UN refugee agency, to be allowed to remain in the country under temporary protection.

Bahaa’s seven-year-old daughter Kholoud doesn’t go to school here, although she says she enjoyed studying in Syria. Egyptian law grants all children the right to primary education and some Palestinian refugee children from Syria do manage to attend schools in Egypt, if there is space. However, Kholoud does not go to one as the family does not have the correct papers to register for a place.

Maryam, a Palestinian refugee from near Damascus, was able to register her children in a private school, costing several thousand dollars a year. But there is no long-term security as the visa stamp in her passport has “not to be renewed” written on it.

At a café, Abu Ammar, a retired man from the southern Syrian city of Dera’a, says that like many other Palestinian refugees from Syria he had been refused entry to Jordan, just a few miles from his home. His daughter was also denied access to Jordan while her husband, who is Syrian, was given permission.

Abu Ammar had then travelled first to Lebanon then to Egypt, which allowed him to enter without any problem, due to his age. But his son, who had managed to obtain permission to leave Syria, was refused entry to Egypt and put on a plane back to Damascus.

It is estimated that at least dozens of people have been refused entry and returned from Cairo Airport. If they are sent back to Lebanon and do not have residency there, the Lebanese authorities would given them 48 hours to leave the country.

If they have to fly back to Damascus from Cairo or try to return to Syria from Lebanon – either officially or unofficially – they would risk arrest and worse. I was given the names of people detained like this in Syria.

Others without permission to enter are detained in Cairo Airport’s transit section, and some are transferred to El-Kanater Prison where they may be held in cells with convicted criminals. A relative of two people held there said he had to pay off people in the prison to ensure that his relatives were not beaten up.

A well-educated Palestinian refugee from Syria, Zakariya, told me he had bribed Syrian officials to let him leave the country and get to Egypt. Zakariya explained that the conflict has forced thousands of Palestinians in Syria to flee their homes in the Palestinian refugee camps, but by so doing they become “fish out of water”, stripped of the minimal protection from security forces and opposition armed groups.

Then, after risking travelling to Damascus or Beirut and onwards into Egypt they are vulnerable “fish out of water” once again. Even an incident such as a small traffic accident could lead to them being arrested and either imprisoned or sent back into danger for not having the correct papers – through no fault of their own.

There are reportedly multiple reasons for Egypt’s discriminatory policies towards Palestinians – including Palestinian refugees from Syria. Some of it goes back as far as 1950 when, at the UN General Assembly, Egypt, Lebanon and Saudi Arabia rejected including Palestinians in the general definition of refugees. The Arab states had two justifications behind their position. The first was to ensure that the UN (rather than host states) took responsibility for the welfare of Palestinian refugees since they considered it to be the entity that had stripped the Palestinians of their lands, and the second was to protect the Palestinians’ long-term claims to their land and a state of their own.

Recently, Egypt has started to increase its security measures against Palestinians given the security problems related to the tunnels along the Egyptian border with Gaza. As well as this, Egypt’s government does not want to take on the burden of providing social services to Palestinian refugees in Egypt given that the Palestinian conflict is not temporary.

Whatever the reasons may be, the situation for Bahaa and the other Palestinian refugees from Syria in 6th of October City and the rest of Egypt must be addressed as soon as possible.

For security reasons all names have been changed and some other details withheld.