Workshop to discuss condition of Palestinians in Egypt and Gaza 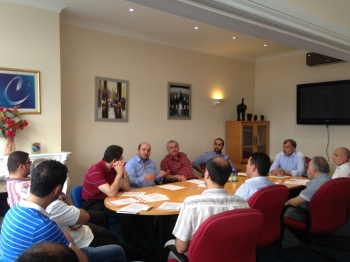 The Palestinian Return Centre (PRC) held a workshop on Wednesday, 17th July 2013, to discuss the implications of political changes in Egypt on the Palestinian cause. Different papers were presented to an audience of journalists, activists and NGO representatives. A legal framework on the conditions of Palestinian refugees in Egypt and their treatment was also presented by Sabah Al-Mukhtar, President of the Arab Lawyers Association (UK).

The paper presented by PRC Head of Media Department, it discussed the humanitarian conditions in Gaza Strip due to the Israeli siege. It also touched on the closure of Rafah crossing and its effects on people. He noted that the number of people traveling from Gaza to Egypt has reduced dramatically.

Mr. Sameh Habeeb expanded on the crisis facing Gaza due to the Israeli siege and its closure of commercial crossings. The paperwork called for an international intervention from Human Rights NGO as the crisis in Gaza is growing day by day with growing shortage of medicine and other basic necessities.

Coordinator of Action Group For Palestinians of Syria delivered a presentation about the plight of Palestinian refugees from Syria who fled to Egypt as well as those living in Egypt.

“Thousands of Palestinian refugees fled the fighting in Syria to Egypt, their numbers are estimated to be 7000. There are some 35 families on the Egyptian/Libyan borders as the Libyan authorities denied them entry for 7 months now.”Said Tarek Hamoud

As for the challenges facing them, he added, “There are no international or local organizations in Egypt to look after them or support them with basic relief services. UNHCR refuses to include them within its services under the pretext that they are included within the mandate of UNRWA. The Palestinian embassy in Egypt deals with their issue as an Egyptian national matter as a result it offers no support. There should be a body to look after them and take responsibility for them.”

Mr. Sabah Al-Mukhtar, President of the Arab Lawyers Association (UK) commented on both papers. He added that Gaza will face humanitarian crisis in all areas including health, environmental and food.

“As for International law, Gaza has borders with Israel and there is a state of war between the two sides. The other border for Gaza is Egypt where there is no war between them, such a fact makes it imperative for Egypt to open the crossing and facilitate the movement of the people to and from Gaza.” Said Al-Mukhtar

He further added that all Palestinian and Syrian refugees in Egypt should be given asylum by Egypt. Yet, the measures taken by Egypt against by Palestinians, especially those from Gaza, had no legal grounds. International law guarantees good treatment of refugees in any country. Yet, it can’t impose specific standards on sovereign procedures taken by states such as the criteria for obtaining visas and visas.

Al-Mukhtar suggested highlighting the plight of Palestinians in Egypt by complaining to UN Human Rights Council and other UN bodies. He also suggested holding coordination meetings with UNRW and office of the UN Human Right Commissioner to discuss under which mandate those Palestinian refugees in Diaspora fall. He also proposed escalating the matter to the decision makers worldwide as well as the Egyptian government. All of which aims at improving the conditions of Palestinians in Egypt and allowing people of Gaza to move freely.

“It is a very slow and bureaucratic process to deal with International organizations. Thus, an immediate move must be taken for the time being to find those refugees a temporary residence in Turkey”

A number of audiences also spoke at the event and suggested different mechanisms to solve the problem of those refugees ranging from media to international law.

PRC General Director, Majed al Zeer pressed on the need to launching popular, diplomatic and legal campaigns to further their issue for the main stream until a solution is found. He added that memorandum and letter will be sent to various decision making circles worldwide.

“We are preparing for a workshop at the UN Human Rights Annual session in Geneva this September 2013. We will ensure to discuss this topic and inform decision makers. We call on all parties to help ease the depressing situation in Gaza as the siege is tightened again, especially as the tunnels are being closed. The people of Gaza should enjoy their full freedom of movement” Added al Zeer