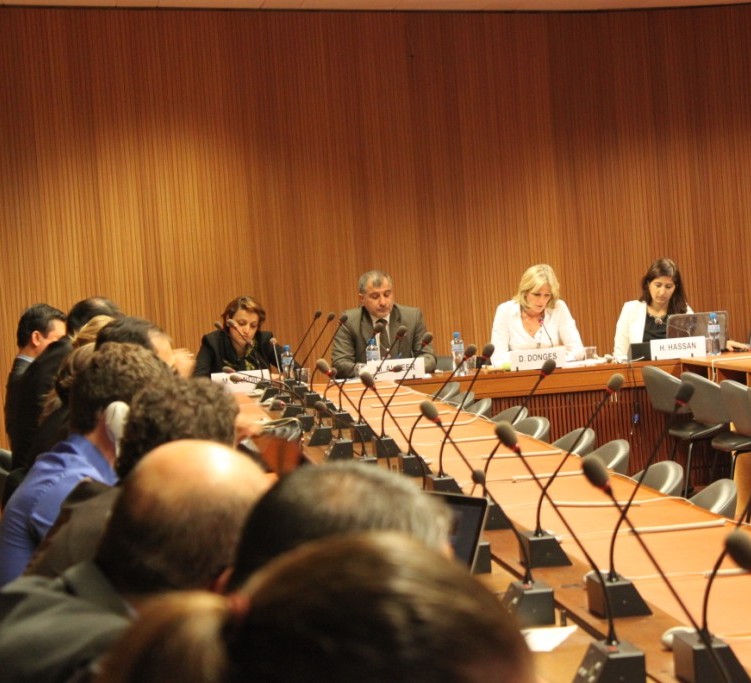 Geneva - Geneva International Centre for Justice (GICJ) and International Organization for the Elimination of All Forms of Racial Discrimination (EAFORD) and in cooperation with: Palestinian Return Centre (PRC), held a seminar to discuss the plight of Palestinian refugees in Diaspora and their right of return. The meeting featured other pressing issues and included a number of speakers.


The seminar held on Tuesday 24th September 2013, was a side event during UN Human Rights Councils 24th session in Geneva which will be concluded on the 27th of September. Representatives of member countries as well as OCHA and NGOS participated at the event. Different topics ranging from political to humanitarian issues were discussed by speakers and audience.

The issue of Palestinian refugees in Syria was addressed in relation to the escalating violence and conflict in the region which is created millions of refugees.

General Director of the Palestinian Return Centre (PRC), Majed Alzeer, spoke at the event and briefed the audience of the current plight of Palestinian refugees in the Diaspora especially in Syria, Lebanon, Jordan and Gaza.  Al zeer confirmed that the UN, International community including Israel and Egypt have a legal and moral responsibility over the humanitarian situation in Gaza.

Al zeer reiterated that the Palestinian refugees remain steadfast and loyal to their struggle for human rights and justice, despite being forcibly expelled 65 years ago. He called for an international mechanism to implement the right of return as enshrined under International law. Ms. Magda Qandil, Middle East Editor, Le Monde Diplomatique - Polish edition delivered a paper on the current conditions of Palestinian Refugees in Syria and Lebanon based on a field report she produced recently.  She concluded that those refugees lack basic support from International community and UN NGOs.

On her part, Ms. Hanine Hassan, a researcher in International law provided a legal framework on the issue of Right to return for Palestinian refugees. Hassan stressed on the fact that many International law charters and agreement like International Human Rights Declaration and UJN resolution 194 confirm this right. However, there is no mechanism to implement that at the moment.The meeting was chaired by, Ms. Daniela Donges of Geneva International Centre for Justice.

Short Link : http://bit.ly/2C8q6M6
Tags
Next Article
Palestinian Refugees in Diaspora and their Right of Return, Where to?
Previous Article
International Conference on Oslo accord concludes in London
Most Views
Related Posts