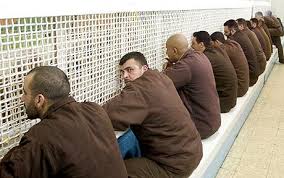 From: The Palestinian Return Centre (PRC)

On the 17th of April each year, Palestinian people mark the Palestinian Prisoners Day remembering around (5000 Palestinian political prisoners in Israeli prisons) and their sacrifice as fighters for the liberation of their homeland and nation.

As part of the international solidarity campaign for the rights of the Palestinian people we are also encouraging everyone to highlight the abuse of Palestinian prisoners and write to their local MP, particular on the complicity of British firms like G4S towards the mistreatment of prisoners.

Below is a draft letter you can use to write to your MP, please make sure to write the name of your MP in the bracket.  You can do this electronically by visiting https://www.writetothem.com/ or by sending the letter by post.

I write as one of your constituents about the plight of Palestinian prisoners and to highlight the complicity of British firms to their mistreatment.

Since Israel’s occupation in 1967, well over 700,000 Palestinians, 40% of the total male Palestinian population in the OPT have been imprisoned by Israel.

Currently over 5,000 Palestinians are held in Israeli prisons, including 183 children and 175 under administrative detention, a form of detention without trial that Israel uses against its political opponents to hold Palestinians indefinitely on secret information.

Children as young as 12 are incarcerated, tortured, placed in solitary confinement and coerced into signing confessions in Hebrew, a language which most Palestinian children do not understand. Every year approximately 1,000 children are sentenced in Israeli military courts.

Prison conditions cut them off entirely from the outside world. Isolated prisoners suffer most as do chronically ill prisoners who are willfully denied proper treatment, medical neglect and only receive pain killers for life threatening disease.

Fatalities are also not uncommon in Israeli prisons. 73 Palestinian detainees have died while under Israeli interrogation. The most recent, Arafat Jaradat, was tortured to death in a G4S-secured interrogation centre in February 2013.

A number of British and European firms are directly complicit in the Israeli occupation most notably the British security company G4S. It plays a key role in the occupation and matrix of control Palestinian experience on a daily basis.

G4S supplies Israel with surveillance equipment at checkpoints and equipment for prisons and detention centers. G4S also provides equipment for Ofer prison, located in the occupied West Bank, and for Kishon and Moskobiyyeh detention facilities, at which human rights organisations have documented systematic torture and ill treatment of Palestinian prisoners, including child prisoners

Crucially, I strongly urge the British government to investigate corporate complicity of firms like G4S in human rights abuse and violations of international law and take robust actions.

All the best,Your NameYour Address