Summary of World War One Impact on Palestine Int. Conference 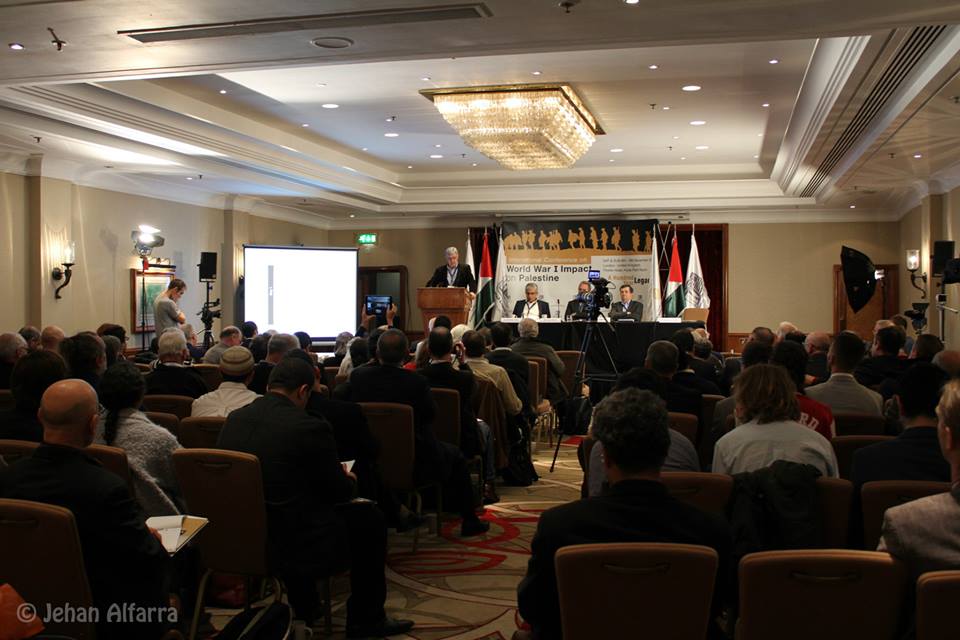 Summary of World War One Impact on Palestine Int. Conference

The International conference “World War I: Impact on Palestine” conference, organised by AlJazeera Centre for Studies (AJCS) and the Palestinian Return Centre (PRC) and attended by prominent public and media figures, ended on 9 November 2014 in London.

The two-day event held in London drew the attention of 150 audience members to events 100 years ago as 2014 marks the 100 year anniversary of the first world war. Expert opinion was drawn upon to examine pre-war Palestine and the succession of events around the Zionist movement and British mandate of Palestine that eventually lead to the division of Palestine and 1948 Al-Nakba and how the accumulation of those activities are manifested in today’s global political context.

The two-day Conference was included a number of sessions. he first day focusing on pre-war Palestine and post-war up to the 1948 catastrophe, while the second day explored the future of Palestine including the role of the international community and social media/ technology.

On day one, the conference was convened by representatives of active in the diplomatic fields and civil society dedicated to resolving the issue of Palestine to include, Dr. Majed Al Zeer, Director of the Palestinian Return Centre; the head of research for the Al Jazeera Centre For Studies as Dr. Salah Eddin Elzein was unable to attend; Dr.Yasin Aktay, a Professor of Applied Sociology; and Dr. Manuel Hassassian, Palestinian Ambassador to the UK. All speakers spoke of the importance of the events surrounding World War One that cemented the betrayal that Palestine endured at the hands of the British and the need for that responsibility to be harboured by Britain today in ending the aggression propagated by Israel as well as bring to fruition the right of return.

Session one on day one collated the accounts from a panel of three about Palestine before World War One. Dr. Aktay, begun with an account of Turkey’s alignment with this issue and the history of the Ottoman Empire in this region. Key points to note were the affable relation between the Ottomans and Palestinian Arabs, with claims that the indigenous Arabs saw themselves as Ottoman citizens, that the Ottomans refused to sell their subjects to the Zionists and how Ottoman law has been used to this day by Israel to further its expansion of settlements. Dr. Jafar Hadi Hassan, Academic in Semitic Languages and Jewish Studies then proceeded to talk about the early Zionist movement prior to World War One and there relation to the international/warring parties and he made apparent the fractured nature of the movement, which was not unified at all up until the issue of the Balfour Declaration.

Dr. Mahmoud O. Al Haddad, Professor of Modern Arab & Islamic History at the University of Balamand, then spoke of the Machiavellian nature of the decision making power of the the powerful parties of the War. This was true of both those parties that were pro and anti Jewish. Those that were anti-Jewish, such as Russia and Germany, wanted to expel the Jews from Europe while those that were pro-Jewish supported the Zionist movement for religious reasons, yes (a return of the Jews to a promised land), but also strategic reasons as placing them in the Near East where they could act as their foot soldiers would have been of incredible strategic importance. Therefore, both sides saw benefit in utilising Palestine to these ends. The question and answer session reiterated the importance of knowing the history of Palestine, amongst other things, before actvitism can be effectively pursued. The Jewish community today is strong as well and influences to a high degree one of the most powerful nations, the USA, and its internal administration. However, it was noted that a shift is being seen again amongst the Jewish community and this will have a profound impact on Israel.

The second session, looked at Palestine during the First World War. The first speaker, Mr. John Keay, Author of the ‘Sowing the Wind: the Seeds of Conflict in the Middle East’, talked about the strategic importance of Palestine for the warring parties, in terms of it’s geographic positioning in the region, which later led to the desire to place European Jews in that land, again for strategic reasons. Mr. Karl Sabbagh, British-Palestinian academic and author, relayed the four key documents that promised Palestinians independence of their land, namely the Balfour declaration of 1917, the Sykes-Picot agreement, the McMahon-Hussein correspondence and an Anglo-French declaration. Only the Balfour declaration had treaty status but what is pertinent is that none were explicit in excluding Palestinians from their land and the division of the land of Palestine. A particularly poignant hypothetical declaration was drafted by the speaker and presented as to a potential 2017 declaration that returns land back to Palestinians. Dr. Anthony Gavin of Edinburgh University closed the session by recounting the notable events of the pre-war and war period and deducted the granting of the Jewish homeland was primarily a result of self-service of British interests, although ideological support for a Jewish homeland was there.

The third session of day one looked at Palestine after World War One and Dr. Ghada Karmi, an academic and author, opened by looking at events from the San Remo conference to the Brtish Mandate, linking the discreet meetings that were happening in the British Foreign Office, that culminated in the San Remo Conference to the Balfour Declaration, which she claims had the Zionist claim instilled in it. She also did not see how a rural people of Palestine could have any chance of being a comparable adversary to the impositions of the British and Churchill’s support of the Zionist ambition. He and Jewish immigrants saw the Arabs that lived there as vagabonds and was firmly committed to the fruition of a Jewish State. Ms Lamis Andoni, the Editor-In-Chief of Al-Araby Al Jadeed in English then spoke of the role of the Mandate in empowering the Zionist project and the Mandate a s a historical point has remained in the hearts of minds of the Palestinians. She also drew comparisons to what happened in history to the present day and noted that while the British was a key party in creating the state of Israel, the USA are funadamentally sustaining Israel’s occupation of Palestinian land. Dr. Peter A Shambrook, an Independent Historian and Author then described how the Mandate was an ‘iron cage’ for the Palestinians. He noted that there was a coupling of increasing reports of Jewish persecution across Europe as well Churchill’s mindset that the Arabs had done nothing with the land of Palestine except confine it to desert. However, while the British wanted to rid its hands of Palestine by signing it over to the League of Nations, in the USA, President Truman became an ally in furthering their goal.

The colonization question seemed to be an important one to some members of the panel and audience, during Ottoman rule, which unconcluded and perhaps subjective. I.e. Were the Ottoman Empire colonizers.

Day two of the conference started with an initial session on international law after World War One and World War Two. Dr. Malath Al Agha, a PhD in EU-Russia foreign policy towards the Middle East and the Palestinian question, from Exeter University, opened and talked about internatioanlisation of the Palestinian question. While the Royal Peel Commission and the British Government made the decision to divide Palestine but the policy over the next 10 years were in favour of Israel. Rather than a political issue, the Palestinian cause was transferred into a humanitarian one but the internationalization of the peace process has not worked in favour of Palestine and has allowed impunity to Israel to continue it’s expansion through settlements over Palestine and further deny Palestinains of their rights and land. Jeff Handmaker, LLM, PhD and senior lecturer in law, human rights and development, International Institute of Social Studies (ISS) of Erasmus University (EUR) spoke about a number of the legal issues that arise after the great world wars that highlight the exploitation of Palestinian land and the transparent ignorance of a number if facets of international law. He alludes that the fact of conflict is not the most significant issue of the Israel Palestine conflict but the impasse that is apparent through various phases after the war and this was lead into by the refusal of the right of return. Acknowledgment of the right of return and the pursuit if self-determination is therefore fundamental to a just settlement. Professor Gilbert Achcar, Professor of Development Studies and International Relations, SOAS, closed by explaining how Both world wars allowed Israel to gain immunity to its crimes in international law. It was not the Balfour Declaration in isolation that provided the framework for a Jewish state initially, for example, the per suction and discrimination of Jews in Europe was instrumental in increasing numbers of migrants to Israel and in gaining the sympathy of the greater powers to Zionism. To date, anti-demotion is used as a defence for any criticism of Israel's actions.

Mr. Oliver Miles, Former British Ambassador to Libya and Middle East Expert, initiated the second session of the day, which focused on the future of Palestine. Oliver stressed that a two state solution for the historical lands of Palestine, one Jewish state, and another for Palestine is firmly engrained in diplomatic intentions. Mark McDonald, Barrister at Chambers of Michael Mansfield Q.C, and Labour Friends of Palestine co-founder spoke about the party politics of pro-Israel and pro-Palestinian camps. The Labour Friend of Israel group, for example, is over –attended in comparison however, the hope is that Ed Miliband can carry forward a sympathetic agenda to the Palestinian cause as well as growing pro-Palestinian sentiment throughout Parliament. Although, he said that the US now needs to be excluded from discussions due to their overriding support in Aid and military finance, there is an apparently inviable relationship there, therefore, focus needs to be concentrated on regional players and BDS. The third speaker, Dr. Salman Abu Sitta, Historian and Academic, Author of Palestine Atlas, talked on charting the future of Palestine. He stated that two assumptions have been used to create the Israel state, which was the existence of anti-Semitism in Europe and by Palestinians and the desire to expel Jews. Today that excuse is still being propelled but mobilisation is occurring, particularly with the emergence of electronic communication and social media.

To conclude the formal sessions of the conference, Rawan Damen, Senior Producer and Director, Al Jazeera Network and Dr. Ezzeddine Abdelmoula, Manager of Research at Al Jazeera Centre for

Studies spoke about an innovative project being propelled by Al Jazeera to address the modern audience and encourage sharing on the numerous new platforms that have emerged over the last decade.