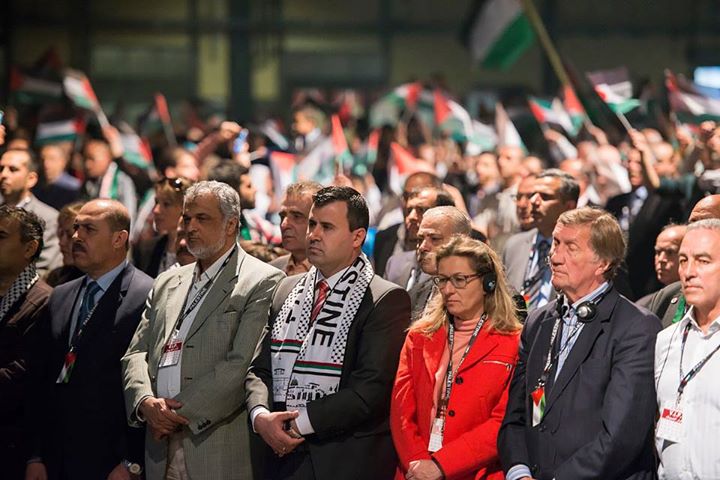 
According to the German police and organizers’ figures; more than 15 thousands participated in the annual event, which was attended by delegations from various European countries.  A number of Palestinian politicians, community leaders and public figures participated in the event.  They came from locations either in the occupied Palestinian territories or the Diaspora. European MPs, activists, journalists and representatives of various NGOs also took part in this year’s event.  Representative of Arab and Muslim NGOs and communities in Europe took part at the event.

Turkish President, Recep Tayyip Erdogan delivered sent a written speech to the Conference where he expressed the deep support for the Palestinian people.The Kingdom of Morocco officially dispatched its minister of Justice, Dr. Mustafa Al Rumaid, who delivered a speech at the conference.

European MPs and MEPs took part at the event such as, Lord Hugh Dykes of the House of lords in the UK and MP John Finnie Independent MSP for the Highlands and Islands in addition to Mr. Pat Sheehan of the Northern Ireland Assembly. Additionally, German politician, Alexandra Thein of the Free Democratic Party took part at the event. The conference launched a number of Initiatives for the Palestinians in Europe such as the Palestinian Chamber of Commerce in Europe, the Palestinian Association of Sport and the General Association for Unions.

Pro Israeli figures, lobby organizations and right wing media outlets in Germany launched a smearing and defamation campaign to stop this event; but they failed. The conference was held within the 67 anniversary of the Palestinian Nakba; and the many Palestinian families enjoyed their culture, folklore and traditions . The conference reaffirmed statements of principles from the previous years: London 2003, Berlin 2004, Vienna 2005, Malmo 2006, Rotterdam 2007, Copenhagen 2008, Milan 2009, Berlin 2010, Wuppertal 2011 and Copenhagen 2012, Brussels 2013 and Paris 2014.

The conference issued its final statement which asserted on all Palestinian rights especially the right of return. The statement announce its principles as follows:

1-    We reaffirm our adherence to the Right of Return for Palestinian Refugees. This right is inalienable and non-negotiable. It can’t be vetoed, circumvented, supplanted or altered.  The Right of Return is a collective and individual right that is irrevocable. Our people will continue their struggle until it is achieved.

2-    We announce it as clear as crystal that our Palestinian people will not accept any compromise or a political resolution that doesn’t guarantee their full inalienable rights especially the “Right of Return” to their homes and villages where they were forced to leave in 1948 or after.  Any political solution should be based on granting our people their full rights as enshrined and explained by International laws and must enable us to obtain all our rights.

3-     We are proud of the struggle and resilience of the Palestinian people who continue to make great sacrifices, 67 years after the Nakba, against occupation and oppression for their dignity freedom and self-determination.

4-    We stress the importance of reforming the Palestinian Liberation Organization (PLO) and activating its essential role by forming a National Council democratically elected in Palestine and the Diaspora all of which to produce new Palestinian leadership.

5-    We are certain that our people will be triumphant and will obtain their full rights; thus we call on freedom, justice and international legitimacy to stand by our just cause and provide help at all levels.

6-    We are extremely concerned about that Catastrophe and the second exodus of Palestinian refugees from Syria, especially at Al Yarmouk Camp. The plight of Palestinian refugees in Syria and the Diaspora will only come to end when they are enabled to return back to their homes, villages and towns in Palestine. Until then, we call on all fighting parties in Syria not to involve the Palestinian camps within the current fighting  and not to impose any options on them especially at Al Yarmouk camp. Therefore, we call on opening lifelines to Al Yarmouk camp and allow basic necessities and support into the camp. We ill continue our efforts to support Palestinian refugees in Syria by sending aid and raising awareness of their plight. The Conference also adopts the outcome of the workshop held onboard of this annual event which issued a number of recommendations.The conferece will work hard to implement these outcomes where possible.

7-    We express our deep concern over the Israeli aggressions on Jerusalem and its indigenous Palestinian residents, especially in the light of growing deportation. We warn against the systematic discrimination against Jerusalemites which sees them besieging in their residential areas by settlements and the apartheid wall.   We also warn against the assault on historical Muslim and Christian sites in Jerusalem.

8-    We salute the Palestinian (Freedom Fighters) prisoners in Israeli jails, especially their bravery against unjust Israeli policies. The issue of Palestinian prisoners is one of our main priorities and we ask the international community to demand an end to their mistreatment. We will work in accordance with International law to lobby for them so they can get true justice. They should be treated as prisoners of war until they are released.

10-    We condemn the Israeli siege on Gaza which is a crime against humanity practiced by Israel. We call for an immediate end of this siege which is flagrant violation of international law by all means. We condemn all those who impose this medieval siege on the innocent civilians of Gaza.

12-    The conference affirmed the need to intensify efforts to face the systematic expulsion of Palestinians in the West Banka and occupied Palestine in 1948 territories. The policy of apartheid, segregation, annexation of land trough the illegal wall and settlements should come to an end so people can live freely.

13-    We remind the free and civilized war of the Apartheid policies in Palestine which is alike that of South Africa. Such an Apartheid policy require firm measures against the state of Israel starting with intensification of efforts to legally prosecute Israeli leaders at the ICC and other rule of courts.

14-    We support all steps and measures that fortify the legal position of Palestine internationally such as joining the United Nations Legal bodies as well as joining the ICC. Such route will boost the Palestinian position and empower persecuting Israel for its many war crimes.

15-    We stress the importance of achieving National Palestinian Unity Agreement between all Palestinian parties. This unity would ultimately help to protect our national rights. Such measures will unite the Palestinian people and enable them to face Israeli occupation.

16-    We urge to craft a Palestinian strategy that employs all legal and possible tools and mechanism to expose Israeli occupation and its inhuman practices against the innocent civilians in Palestine. This strategy must make sure at the end that all Israeli war criminals will be brought to justice.

17-    We remind Europe of its historical role on the Palestinian Nakba which hit the Palestinian nation in 1948 where we still pay the price till now. It’s clear that European policies, laws and ethical support for justice and human rights make an obligation for Europe to stop any support of any form for the state of occupation (Israel). Thus, we call on Europe to cancel all trade, commercial, cultural cooperation with Israel and adopt BDS as a policy towards a state that adopt apartheid against another nation. The conference stresses again on historical responsibility of Europe for the Palestinian Nakba and displacement of 1948. Generations of Palestinian people are still paying the price of Europe’s mistake and still Europe continues to assist in the expansion of the state of Israel and its illegal policies.  We announce our full support for the International Campaign demanding an apology from Britain for the Balfour declaration which marks the beginning of Palestinian suffering.

18-    We commend all efforts in Europe and other parts of the world that aim at helping the Palestinians in challenging and confronting Israeli apartheid, land theft, siege and illegal practices. We urge everyone to remain steadfast and develop these efforts that support the Palestinian people for their fight against occupation and injustice towards freedom, justice, human rights and a democratic Palestine.