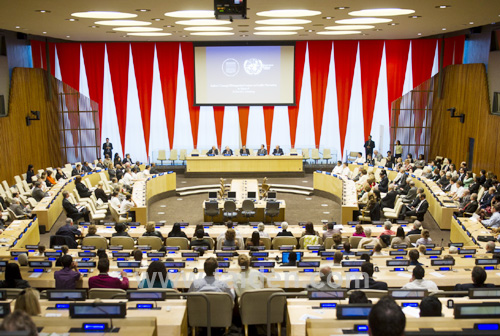 London - New York  20-7-2015 -The Palestinian Return Centre  (PRC) express it's satisfaction over  the result ECOSOC vote  on Monday which granted the centre the ECOSOC NGO Consultative status. The centre consider the outcome as historic, strategic and positive victory for the Palestinian people and their right of return.


The Centre  thank  all  those  countries  who voted  to confirm  our  ECOSOC status  which  was  initially recommended on the  1st of June  2015. PRC has sought to obtain the status as early as 2011 but was hindered by Israel at all times. Israel has made all efforts to block us where dozens of questions have been directed to delay the application.

PRC is in the  process of examining  and  evaluating the position of  the countries  which  adopted  the Israeli motion  which  was built on fabricated claims.

"We make it clear  that  this  victory is for our Palestinian nation where  the ECOSOC has  admitted us  - an NGO that's  dedicated to defend the right of return for Palestinian refugees - despite  the  very  organised smearing campaign orchestrated against us by Israel and its so-called  "independent NGOs" which  solely  funded  by the Israeli government and  right wing  Jewish-American groups in the US. We observed  this  campaign for years and know very  well  how they worked hard to deter any support for us". Said  PRC spokesperson

The centre will continue to serve Palestinian Refugees and protect their Right of Return which clearly guaranteed by international law, Universal Declaration of Human rights and related UN resolutions; all of which are they  key principles of PRC

PRC believes this vote is  "strategic victory" and yet another defeat  for  the Israeli  narrative which  has no  credibility whatsoever as at International community level. The UN member states and International community in general are fed up of the war crimes, Human rights violations and apartheid policies adopted and  practiced by Israel, the occupying power.

"Certainly  our  victory  was  supported by  great powers  which refuses the Israeli hegemony backed by American diplomacy. We are reviewing the position of the Europeans very carefully and have plans in place to tackle these positions which were built up due to the pressure of Israel. The vote has revealed the politicised decisions of many member states which pretend to support the work of civil society, human rights, third world countries and UN SGDs" added the statement

United States statements before the NGO committee on 1st of June 2015 and before the ECOSOC meeting, Monday 20 July 2015, was very contradictory. The US stated in their statements that had outstanding remarks and questions that are still un answered" Meanwhile, the centre refuses such statement as the US never bothered to ask a single question while Israel has asked PRC dozens! Certainly, the US had a chance to ask but it chose not to.

PRC states that all appreciation is due  to great efforts led by Republic of the Sudan and the support of the Russian Federation and  People Republic of China.

The centre also appreciate the  efforts exerted by the Permanent Observer Mission of Palestine to the UN which  played  a central  role in making  this success  feasible. PRC has coordinated closely and continuously with H.E. Ambassador, Dr. Riyad Mansour, and the staff of the mission.